The Promise of Buddhist Economics

UC Berkeley economist Clair Brown argues for an economic system based on altruism, sustainability, and a meaningful life. Because even economics is about more than money.

In Buddhist economics, happiness is defined by the concept of interconnectedness. All people, all beings, are interdependent with each other and with nature. Happiness comes from making sure people lead comfortable, dignified lives and interact with each other and nature in a meaningful, caring way. 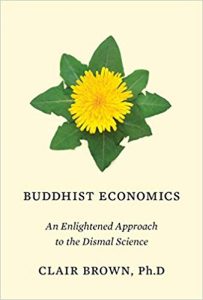 Clair Brown, an economics professor at U.C. Berkeley and a practicing Buddhist, has developed a holistic model, one based on the notion that quality of life should be measured by more than national income. Brown advocates an approach to organizing the economy that embraces rather than skirts questions of values, sustainability, and equity. Complementing the award-winning work of Jeffrey Sachs and Bill McKibben, and the paradigm-breaking spirit of Amartya Sen, Robert Reich, and Thomas Piketty, Brown incorporates the Buddhist emphasis on interdependence, shared prosperity, and happiness into her vision for a sustainable and compassionate world.

Clair Brown is a professor of economics and director of the Center for Work, Technology, and Society at the University of California, Berkeley. An economist focusing on work and economic justice, she is a past director of the Institute of International Relations at Berkeley, and chair of the Committee on Education Policy of the UCB Academic Senate. She lives in Richmond, CA.