Major General Eduardo Aldunate has served as a Chilean Army officer since 1973. He has been an instructor and commander in mountain infantry units and special forces units and was the Deputy Force Commander of MINUSTAH between September 2005 and September 2006. He heserved as commander of Military Schools for the Chilean Army. He has written books and academic articles on military leadership and strategic and civilian-military relations for civilian and military publications.

Worth a Look: Backpacks Full of Hope–The UN Mission in Haiti 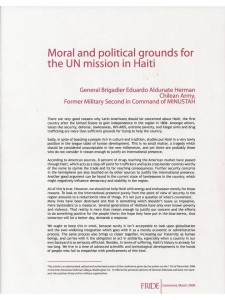 MajGen Eduardo ALDUNATE Herman, Chilean Army (Ret), served as the Deputy Force Commander of the United Nations Force in Haiti (MINUSTAH) in the earliest rounds, and was instrumental in both sponsoring the Joint Military Intelligence Analysis Center (JMAC) concept in its first modern field implementation, but also in evaluating most critically both the lack of useful intelligence from allies relying on secret sources and methods that did not “penetrate” to achieve gangs and neighborhoods; and the astonishing “one size fits all” propensity of the allies to treat every “threat” as one that could be addressed by force.

His contributions are helpful in understanding the more recent failure of allied relief operations in Haiti that again assumed that the use of armed bodies would address the problem, without making provision for real-world ground truth intelligence (CAB 21 Peace Jumpers Plus) or intelligence-driven harmonization of non-governmental assistance (Reverse TIPFID).