The aim of this book is not to provide yet another critique of capitalism but rather to contribute to the ongoing dialogue for post-capitalist construction, and to discuss how another world could be possible. It builds on the idea that peer-to-peer infrastructures are gradually becoming the general conditions of work, economy, and society, considering peer production as a social advancement within capitalism but with various post-capitalistic aspects in need of protection, enforcement, stimulation and connection with progressive social movements. Using a four-scenario approach, the authors seek to simplify possible outcomes and to explore relevant trajectories of the current techno-economic paradigm within and beyond capitalism. They postulate that the mature peer production communities pose a sustainable alternative to capital accumulation, that of the circulation of the Commons. They make some tentative transition proposals towards a Commons-based economy and society for the state, the market and the civic domain.

A status report on the Open Source Energy project in France

A contribution from Geoffroy Levy from Nantes:

“A few words about a French project named Open Source Energy. This project is intended to enable the design of open hardware solutions to capture the different kinds of energies available all around us (from the environment or from human activities). A first module to transform and to store electricity from renewable sources is being designed: the ENERCAN (opensourceenergy.wordpress.com/lenercan-v1). This first brick is the starting point of a large scale design process toward the creation of new solutions inspired by old or forgotten ones and improved by the use of high-tech devices. The project is not about large and costly devices but about simple, open and cheap modules that can be replicated to capture every stream of available and lost energies, even the smallest one.

Besides designing the modules, the team took part in several events related to design or DIY in order to promote the project and to share with others.

END_OF_DOCUMENT_TOKEN_TO_BE_REPLACED

Towards a grand coalition for the commons

I believe there is a historic opporunity to reconstruct a progressive majority around enabling the commons, which would be based on the following political and sociological complementarity between political forces and parties.

Though the fortunes of the new player in politics are down from the moment I wrote this, I believe the general gist is still valid.

Obviously, my proposals are centered on the European situation.

END_OF_DOCUMENT_TOKEN_TO_BE_REPLACED 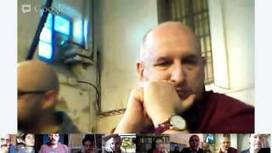 This week the interviews with experts and (ex-)Wikipedians, on which parts of my paper “Peer Governance and Wikipedia: Identifying and Understanding the Problems of Wikipedia’s Governance (2009)” were based, are going to be presented in a series of separate posts. This first post contains the short interviews with Michel Bauwens and Axel Bruns who are answering the same questions.

Phi Beta Iota:  Strongly recommended.  Wikipedia lacks integrity.  It has been taken over by various cabals including Zionists, the various industrial complexes, and our very own CIA.  Wikipedia is a classic example of a “controlled” asset used to misinform the public at great convenience.  Across the sciences and the humanities, across most public issue areas, and certainly with respect to Open Source Intelligence, WIkipedia is a disinformation source that is very convenient for the loosely educated to embrace.  It is a form of “soft” propaganda and therefore toxic.