How We’re Applying the Sharing Economy to Education

A sustainable economy requires that both the supply and demand sides benefit from a transaction. In education, we see so many inefficiencies between those supplying the knowledge and those consuming it. Teachers feel like they’re being underpaid and students feel like they are overpaying for the education they are receiving.  This system is broken, presenting an opportunity to recalibrate and bring better equilibrium to the market. We’ve already seen the collaborative consumption business model transform industries from hospitality (Airbnb) to transportation (Lyft), and we believe that education is ripe for a similar disruption.

I founded the online education company Course Hero when I was a student at Cornell. I was frustrated that so much knowledge was bottled up in private hard drives and individual brains without a convenient, accessible forum to share and distribute this knowledge. At the same time, the student lifestyle—balancing homework, jobs and extracurricular activities—wasn’t necessarily conducive to accessing professors, tutors or other help they may need during designated office hours.  I saw an opportunity to connect this bottled up knowledge with the students who needed it and create a better learning experience—one that benefits both the expert and the learner.

Digital services are ready for a business model change, which is why Course Hero is working to build an online “knowledge marketplace” where experts can make money sharing their expertise, and learners can consume that content when and where they need it. By incentivizing experts of all forms to interact with Course Hero’s existing user base of learners, the knowledge marketplace is able to scale while providing consistent, quality content that meets the demands of learners. Like the retired miner who signed up with Lyft to earn extra cash shuttling city-dwellers around San Francisco, Course Hero is empowering a new class of microentrepreneurs who are financially rewarded for sharing their knowledge on their own time in the form of courseware, documents and tutoring advice.

A knowledge marketplace can provide a powerful supplement to the traditional learning experience. For example, since professors, TAs and tutors have limited availability, we developed Course Hero’s online tutoring platform that invites students to ask questions, and experts to get paid for answering as many or as few student questions as they want. Office hours can be impossible to make, however an open tutoring platform ensures that an expert will be able to assist a student even at 2:00 am the night before a final — often when the student needs it most.

END_OF_DOCUMENT_TOKEN_TO_BE_REPLACED

(05 March 2013) – A Flash Eurobarometer measuring citizens’ engagement shows that Europeans trust civil society organisations to influence policies and make a difference in the life of their communities.

While Europe faces economic and social challenges, EU citizens continue to involve themselves in participatory democracy activities, including signing petitions and becoming active members of non-governmental organisations, mainly at local and national level. 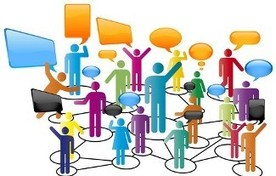 A majority (59%) of people think non-governmental organisations share their interests and values. A majority of respondents (54%) think that voting in EU elections or joining an NGO can influence political decision-making and even more respondents (7 out of 10) think that voting in local or national elections is an effective way to influence political decisions.

A third (34%) of respondents say that they have signed a petition in the last two years. 24% have conveyed their views on public issues to an elected representative at local/regional level, 10% at national level and 4% at EU level.

The Spanish P2P Wikisprint on March 20

Next Wednesday, March 20, a fascinating new stage in transnational cooperation will arrive when scores of commoners in twenty countries take part in a Spanish P2P Wikisprint, a coordinated effort to document and map the myriad peer to peer initiatives that exist in Latin America and Spain.

The effort, hosted by the P2P Foundation, was originally going to be held in Spain only, but word got around in the Hispanic world, and presto, an inter-continental P2P collaboration was declared! (A Spanish-language version of the event can be found here.)

As described by Bernardo Gutiérrez on the P2P Foundation blog, the Wikisprint will bring together an indigenous collective in Chiapas with a co-working space of Quito; a crowdfunding platform in Barcelona with the open data movement of Montevideo; a hacktivist group in Madrid with permaculturists in Rio de Janeiro’s favelas; and a community of free software developers in Buenos Aires with Lima-based city planners; among many others.

END_OF_DOCUMENT_TOKEN_TO_BE_REPLACED

Value from nothing – the sharing economy

AirBnb,  etsy and Relay Rides are the current poster children of the sharing economy. If you don’t know what that is, it’s also called collaborative consumption or peer-to-peer selling. In other words, just fancy names for one person selling or renting their stuff to another person. Clearly this is not a new idea but it has never really been possible to do it on such a large scale. In the case of a site like Etsy – which describes itself as a global marketplace for unique goods, from furniture to food – they have allowed the local artisan to take his or her products far beyond the confines of their communities, towns, cities or countries and sell to a global market.

Tim O’Reilly, tech venture capital pioneer and CEO of O’Reilly Media, moderated a panel at SXSW Interactive with Nate Blecharczyk, CTO and co-founder of AirBnb, Juliet Gorman, communications director of Etsy, and Shelby Clark, founder of Relay Rides, and they explored some drivers of growth in the sharing economy as well as what it takes to be successful. It kind of goes without saying that the convergence of social networks, commercial payment, distribution and logistics technology – and perhaps a greater willingness for people to explore alternative income streams in tough economic times – created the right conditions for peer-to-peer selling to take off.

The Structural Communality of the Commons

Thus, commons structurally generate responsibility on the part of their participants for preserving the resource and the collective relationships, while markets generally do not. Commoners are in charge of shaping the social relationships involved; therefore, they can take responsibility for their actions. However, this also entails their responsibility to do so. In the commons, it is possible to deal with conflicted goals and varying needs before taking action. In the market, however, action comes first, and then the consequences are dealt with later. The market is seldom capable of mediating between different needs and identifying responsible solutions because maximum profits is the touchstone for choice.

Text of an essay by Stefan Meretz of Keimform.de.

Originally published in The Wealth of the Commons (eds. David Bollier and Silke Helfrich; Levellers Press, Amherst, MA, pp. 28–34). License: CC-by 3.0.). This is a version without references.

The commons are as varied as life itself, and yet everyone involved with them shares common convictions. If we wish to understand these convictions, we must realize what commons mean in a practical sense, what their function is and always has been. That in turn includes that we concern ourselves with people. After all, commons or common goods are precisely not merely “goods,” but a social practice that generates, uses and preserves common resources and products. In other words, it is about the practice of commons, or commoning, and therefore also about us. The debate about the commons is also a debate about images of humanity. So let us take a step back and begin with the general question about living conditions.

END_OF_DOCUMENT_TOKEN_TO_BE_REPLACED

Michel Bauwens (born 21 March 1958) is a Belgian Peer-to-Peer theorist and an active writer, researcher and conference speaker on the subject of technology, culture and business innovation.

Bauwens is founder of the Foundation for Peer-to-Peer Alternatives and works in collaboration with a global group of researchers in the exploration of peer production, governance, and property.

With Frank Theys, Bauwens is the co-creator of a 3 hour documentary TechnoCalyps, an examination of the ‘metaphysics of technology’. He taught and, with Salvino Salvaggio, co-edited a two-volume French language anthologies on the Anthropology of Digital Society.

Bauwens is the author of a number of on-line essays, including the seminal thesis Peer to Peer and Human Evolution, and The Political Economy of Peer Production. He was also editor of the email Pluralities-Integration newsletter (until 2007, when it ceased production).

P2P in a Nutshell [See especially The State of It All]

Peer Governance as a third mode of governance