A Florida group is calling on state lawmakers to enact a law “against state-sponsored perversion and oppression” in the wake of an aggressive TSA patdown of a diapered 95-year-old woman at Northwest Florida Regional Airport.

Phi Beta Iota: This is real simple.  State by state, nullify the TSA and administer security as a state function.  If the federal government does not like that, secede from the Union.   TSA is not blocking flights from Europe or anywhere else that are fortunate in not having to put up with what passes for security in the USA. 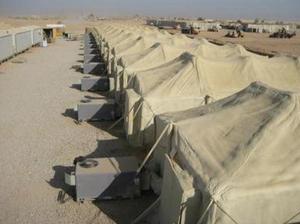 Among The Costs Of War: $20B In Air Conditioning

The amount the U.S. military spends annually on air conditioning in Iraq and Afghanistan: $20.2 billion.

That’s more than NASA’s budget. It’s more than BP has paid so far for damage during the Gulf oil spill. It’s what the G-8 has pledged to help foster new democracies in Egypt and Tunisia.

Phi Beta Iota: It is always helpful to remember Medard Gabel’s graphic on the cost of peace versus war.  For what we have spent on the military-industrial-intelligence complex these past ten years, never mind the legalized fraud of Wall Street, we could have eradicated the ten high-level threats to humanity.  The US Government lacks both intelligence and integrity.  Good people trapped in a very bad system–we need to set them free.  An nation’s best defense is an educated citizenry that pursues a foreign policy of peace and commerce with truth and trust as core value and core outcome.