4.0 out of 5 stars Valentine for the Real Conservatives — Bland and Not Transformative, March 9, 2015

Positive up front: reading a book by another person is like getting a few hours of their time to yourself, so any book by Ralph Nader is a substantive value to anyone interested in ethics and governance. However, this is not the transformative book I was hoping for, and I even have to wonder if all the great minds providing blurbs even read the book. For the long critique of this book, which I totally embrace, see Herbert Calhoun’s 3-star review, This is Both an Accurate and a Useful Treatise, But …?, October 25, 2014. I’d like to see it voted up, Mr. Calhoun, whom I have had the privilege of meeting at Amphoras in Vienna, is one of the most intelligent and broadly read individuals I have ever encountered.

Second positive up front: in terms of inspiring generations of independent thinkers some of whom have become thought leaders in their own right, Ralph Nader is special. Jim Turner — co-author with Lawrence Chickering of Voice of the People: The Transpartisan Imperative in American Life and Theresa Amato, whose own book Grand Illusion: The Myth of Voter Choice in a Two-Party Tyranny contributed to my radicalization, stand out. 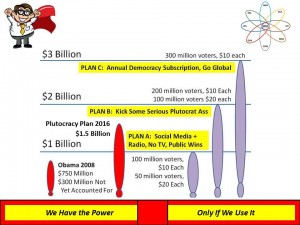 Two thirds of this book can be read quickly, and the chapter on twenty-five proposed redirections and reforms is bland to the point of irrelevance to the future of the country. All basic stuff, which is no doubt the point — the author has gotten left and right to agree that the sky is (occasionally) blue.

For me the real value of this book is to be found in Chapter 6, “Obstacles to Convergence and How to Overcome Them.” That is the gem in this book and that is the one chapter in this book worth using in the classroom and circulating among activists. That is the chapter that explains why all the good people who come to Washington with the best of intentions ultimately go bad. See also Tom Coburn’s Breach of Trust: How Washington Turns Outsiders Into Insiders.

There are bits and pieces of the book that resonate enough to earn a marginal notation, a few that I will list here include:

01 Corporations have hijacked the conservative label to mis-represent many very un-conservative policies and actions
02 Adam Smith’s “invisible hand” assumed a decentralized marketplace, not one dominated by monopolies
03 Corporations do not just stop bi-partisan legislation dead, they also stop federal commissions and studies
04 It helps to start with an agreement on ends, and then work back toward means which is where most of the differences lie
05 Agrarians, Decentralists, Legalists, and Reformers are among the Conservative groups of principle that Liberals should be connecting with
06 Patrick Buchanan receives special attention and I agree with this completely — a rock-star equal to Nader and Dennis Kucinich
07 Useful critique of summits that fail for being too short, too many people, not focused enough, without sustaining resources

The letter to the billionaires is long and turgid. It’s three recommendations (fund writings, convocations, and organizations) are pedestrian. A much more inspiring book on billionaires and how they are trying (and failing) to do good is offered by Darrell West Billionaires: Reflections on the Upper Crust. However I do want to emphasize that Warren Buffet, Bill Gates, and Tom Steyer have all gone on record with respect to the system being broken, and the latter two have admitted that their hundreds of millions given to charity have not had the desired outcome [something Russell Ackoff would have told them for the price of one book, for example Ackoff’s Best: His Classic Writings on Management, they have all been “doing the wrong things righter instead of the right thing.” The right thing — not really touched on in this book, is Electoral Reform. The author makes the fundamental mistake of concluding on page 154 that “the electoral doors are closed to basic challenges.” WRONG! See my Kindle book, #2 in Civics yesterday, for a $2.99 contrarian perspective.

Reflecting on this book at this point in time, I would have to conclude — and this is why it earns four stars instead of three as Herb Calhoun has assigned — that Ralph Nader has done a superb job of reaching out to some of the key Libertarians and Conservatives, he has helped separate true conservative philosophy and ethical intentions from platitudes and hijacked programs, and this provides an opening. There is no question in my own mind, as I focus on Open Power and Electoral Reform in 2015 (in time to elect and Independent President and a slide of Independent and small party Members in 2016) that Ralph Nader continues to offer a great deal to any alliance seeking to go beyond the left-right divide.

Critically, and the reason this book is not in my view worthy of a fifth star, he neglects the perspective of the hundreds of authors I review in my free online essay and linked list at Tiny URL /Steele-Reform, here Amazon only allows me five more links:

Democracy Matters: Winning the Fight Against Imperialism
Democracy’s Edge: Choosing to Save Our Country by Bringing Democracy to Life
Griftopia: A Story of Bankers, Politicians, and the Most Audacious Power Grab in American History
Society’s Breakthrough!: Releasing Essential Wisdom and Virtue in All the People
The Big Disconnect: Why The Internet Hasn’t Transformed Politics (Yet)

Dare I say this? Ralph Nader is insular and out of touch with the collective intelligence and deliberative dialog movements, and I don’t see much in the way of transpartisanship in this book either. It is not about left-right anymore, reading anything by Paul Ray and Sherri Ruth Anderson should make that clear. There are 110 million out of 319 million in the USA who are at or near the poverty level — while Walmart employees are mentioned in this book, I do not get the feeling that the author is actually focused on addressed the urgency of achieving a transformation that speaks to the needs of that 110 million — or the 130 million eligible voters that chose not to vote in 2012.

A giant, without question. Unfortunately, the author is stuck in a corporatist mind-set that is too removed from where Occupy, the Independents, the Greens, the Libertarians not owned by the Koch Brothers, and the Working Families are to be found. Now I see that we all need to reach out to Ralph Nader. #ElectoralReform. Happening now.