President Trump on Thursday announced that he has directed the US intelligence community to “quickly and fully cooperate with the Attorney General’s investigation into surveillance activities during the 2016 Presidential election,” adding that Attorney General William Barr has been given “complete authority to declassify information pertaining to this investigation. 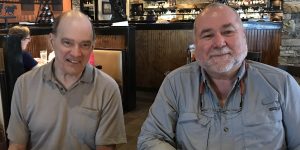 ROBERT STEELE: Bill Binney and I did not know each back then, but we called the Russian hacking of the DNC a hoax from day one and we were both right — BIll applied his technical skills, I applied my clandestine covert action and analysis skills. There were about twenty others that got it right, I list them in one of the updates at the first link below.

I would like to add that I consider John Brennan and Mike Hayden particularly despicable and deserving of the full force of the law.  In Brennan’s case, I would go so far as to suggest that he be extradited to Russia with Buzzy Krongard and William Bowder to face charges for their Gold War subversion of the Russian economy, an act of war not declared by Congress. Of course Dick Cheney and the Bush family and George Tenet bear huge responsibility here, but between the lies about Russian collusion and the Gold War, John Brennan in my view is particularly deserving of hanging or extradition.

Mike Hayden is beneath contempt — apart from being relatively stupid, he lacks ethics in every sense of the word.  It was Mike Hayden that violated the Constitution at NSA with warrantless mass surveillance, and Mike Hayden that violated all possible standards at CIA by approving rendition, torture, and the black prisons to do them in, something one of my former colleagues, Dusty Foggo, was all too glad to organize.

I am not forgetting the executives at NASA, Boeing, and Lockheed.  We will get to them eventually, along with key people at Booz Allen and other firms that have been in active violation of so many laws and conventions.

I will repeat the point I made in my recent interview below: the only foreign powers that interfered in the US election in 2016 (and all US elections generally) are Zionist Israel and Great Britain misrepresenting the United Kingdom.

20161230 Robert Steele: US IC Allegations Against Russians Are Crap — Our Own Traitors, Not the Russians, Are the Real Enemy, Fake Evidence & Fake News – UPDATE 22

20170102 Robert Steele in Defence and Intelligence Norway: The Russians Did Not “Hack” the US Election – a Few Facts from a Former CIA Spy

20170106 The Trump “Intelligence” Briefing Has No Proof Russians Hacked (or Leaked) Anything: Assessing Russian Activities and Intentions in Recent US Elections UPDATE 8

20170106 CIA Training Handbook: How to Fake Intelligence Plus Case Study on Faking Russians Hacking US Election

20170109 Robert Steele: The Soft Coup Collapses – Blackmail Revealed – What Next? CIA was bluffing, produced no evidence – Russians did not “hack” the election. Is this the beginning of the end of the Deep State in the USA? Can Trump clean house & wage peace? (Trump Revolution 06)

20180720 William Binney: The Russians Did Not Hack the DNC or Anything Else!

Robert Steele with Javad Heirannia, “Counterintelligence Failure by CIA and NSA in Venezuela: An Opportunity for President Donald Trump to Reform US Intelligence,” American Herald Tribune, 10 May 2019.  PBI BackUp also in Tehran Times (13 May 2019).

Steele, Robert, “The Big Lie: “Russian Propaganda.” The Bigger Lie: “The Truth is What We Say it is.”,” American Herald Tribune, 18 September 2018. PBI BackUp