Jewish intermarriage into non-Jewish power elites is a significant but under-researched aspect of Jewish strategies to maintain and expand influence.

In fact, within a century the scale of Jewish intermarriage with the British aristocracy was such that it led L.G. Pine, editor of Burke’s Peerage from 1949–1959, to write in 1956 that “the Jews have made themselves so closely connected with the British peerage that the two classes are unlikely to suffer loss which is not mutual.”

One of the great lies fed to the masses is that we now live in an era of meritocracy, with access to elite status open to anyone who is “talented” enough. But the lie doesn’t bear up under closer scrutiny. Even if one adopts the position that successfully competing to get into a “meritocratic” institution like an elite university is an avenue towards eventual, wider, elite status, one is confronted with phenomena like Jewish overrepresentation at elite universities. The fact remains that we live in what a January 2015 article in The Economist described as a flawed “hereditary meritocracy.” The hereditary meritocrats who compose our modern elites benefit from social and ethnic networking in much the same way as the hereditary aristocrats did in earlier periods. There are gatekeepers controlling access to elite universities, elite media positions, and elite social functions. As has been stated, Jews are massively overrepresented across all indicators of elite power and influence. Meritocracy, like modern democracy, is an illusion.

We are teased and tantalized by the fantasy that Trump is a potential “man of the people.” But I cannot escape the impression that he is a utilitarian and primarily economic character, who seeks a social contract based on personal convenience and material interest. In his business and political history I see only the “distilled Jewish spirit.” In his family tree I see distilled Jewish blood.

ROBERT STEELE: As of today, Trump appears to be owned by the Zionists. The following specific initiatives suggest Israel First rather than America First in relative order of Presidential disregard for the Constitution:

I do not agree with those who would add to the above list the US withdrawing from the UN Human Rights Council — I’d like to see the UN expelled from New York and the US leaving both the UN and NATO; and I support the President’s decision to withdraw from JCPOA — all toward a face to face meeting with the Supreme Leader when the timing is right.

I will not list the many obvious Zionist appointments including John Bolton (alleged rapist, swinger, and pedophile according to Larry Flynt), the fact that 10% of our Senior Executive Service holds dual Israeli-US citizenship, or the fact that the vast majority of both our national and state legislators are in come way compromised by Israel, either via money or blackmail.

HOWEVER, having said all of that I believe President Trump to be a patriot and a pragmatist.  And we have this from Q: 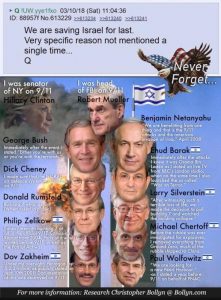 The President knows full well each and every one of the sins of the Zionists inclusive of stock and currency manipulations and the planning and execution of 9/11.  So I am betting that he will indeed eradicate the Zionist parasite before the end of his second term.  If he does not he has opened the way for others to do so. My three expectations of our President — if he wishes to be the greatest President ever — are constant:

The writ of mandamus from the Lawyers Committee of Inquiry into 9/11 could force the issue of the criminal grand jury that the US Attorney in the Southern District of New York is desperately trying to delay. At some point the Nine Veils of Evil aspect of the Epstein story will break, and the other 49 cells revealed — if may be that the President is already having those uncovered by the Utah investigation. He must take on the false flag operations and encourage the entire country to go to open carry, and get away from the idiocy — the unconstitutional idiocy — of red flag laws that disarm without due process. He must give us #UNRIG or he will NOT be t he greatest president ever.

Another Day, Another Jewish Trump Wedding