Phi Beta Iota: An interested group of funders who approached Earth Intelligence Network asked the obvious question: why isn’t the US Government doing  this?  Where is public diplomacy, covert action, soft war, and so on?  Our answer was straight forward: the US Government does not want to liberate peoples, it chooses instead to spend borrowed trillions on elective unconstitutional wars that burn up the military machine so it has to be bought again.  If Hillary Clinton wanted to have a legacy, she would demand the pre-approved IOC funding of $125M for the Open Source Agency, and begin implementing the open source tri-fecta long under development by over the past twenty years by thousands of professionals committed to intelligence with integrity.

Multinationally-Oriented Open Source Agency (OSA) as found on pages 23 and 423 of the 9-11 Commission Report (but with integrity, which is to say, not part of the CIA but rather as a sister agency to the BBG under diplomatic auspices), instead the US Government has elected to wage multi-trillion dollar elective wars using borrowed money and completely lacking in Constitutional authorization.

This is an improvisation working off Robert Garigue’s slide, “Control Framework is a hierarchy of accountability structures”from his briefing,Robert Garigue: The New Information Security Agenda–Managing the Emerging Semantic Risks and Robert Steele’s slide, Epoch B Leadership.  It is NOT POSSIBLE to “command” cyber-security from the “top down.”  One can only build in accountability and resiliency–which is to say, intelligence and integrity–from the bottom up.  Education, not technology, is the core change agent.  Human-centered design driven by intelligence is the architect, NOT pseudo-engineering from contractors seeking profit at any cost. 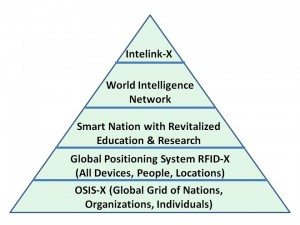 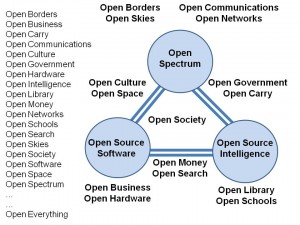