Mexico said Thursday that more than 30,000 people have been killed in drug violence since President Felipe Calderon launched a crackdown against cartels in late 2006.

The government said the violent La Familia cartel in western Mexico has been “systematically weakened” by recent arrests and deaths of leading members of the gang. 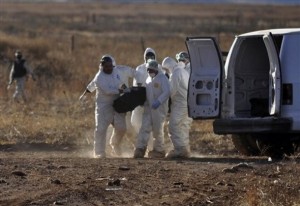 Forensic workers carry a body inside a body bag that was found at a clandestine grave in the town of Asencion, near the northern border city of Ciudad Juarez, Mexico, Saturday Dec. 11, 2010. At least 5 bodies have been found in three separate clandestine graves found in the site. (AP Photo/Raymundo Ruiz)

Phi Beta Iota: Both Mexico and the USA are “unintelligent” countries lacking in strategic analytics able to clearly demonstrate “cause and effect.”  If they were “smart nations” as we have been advocating since 1995, marijuana would have been legalized long ago, corruption among local officials squelched, pay and training for the police substantially increased….and so on.  Everything is connected.  For example, the weapons do not really come from US handgun stores–they come from the Guatemalan military that sells entire shipments of “old” weapons provided to the US, and then tells the US the weapons were destroyed.  The serial numbers on the captured weapons tell the truth.  Until nations learn to think honestly and holistically, any single flaw can be fatal, and multiple flaws will interact in unanticipated and increasingly costly ways.  In the USA, crime runs from the border to Wall Street, where drug money laundering has long been known to be a major source of liquidity.  Politicians in both countries are paid to be anemic in their thinking and ineffective in their duty to the public.  Under these circumstances, neither law enforcement nor the military can be effective.  Integrity is the missing factor.