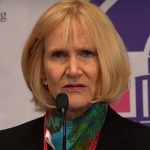 As the Jewish Anti-Defamation League and American Jewish Committee try to shut down activist Alison Weir’s upcoming event at Clovis Community College in Fresno CA, she explains what it is the groups are trying to hide.

Alison Weir, who will be speaking at Clovis Community College on September 18th, says that recent claims against her are intended to block people from learning the truth about Israel-Palestine.

“When you want to block the message, you shoot the messenger,” Weir says.

“Israel advocacy groups like the ADL and American Jewish committee don’t want people to learn the facts I provide in my talks.

ROBERT STEELE: As long as President Donald Trump continues to put Israel First, not America First, while failing to defend the Constitution (1st, 2nd, and 4th Amendments particularly), he is destined to lose to Biden-Warren, however odious that combination may be.  2020 may be the year in which a Libertarian-Green team can take the White House on the promise of #UNRIG and returning America to Americans.