On 13 June, James Risen of the New York Times conveniently (at least for the Pentagon and the war party) reported that the “United States has discovered $1 trillion in untapped mineral deposits in Afghanistan [also attached below for your convenience].  I say convenient, because time is running out for the Pentagon in Afghanistan, and this report introduces a ‘new’ reason for occupying Afghanistan.  The timing of this report was noticed very quickly by several skeptical commentators ( e.g., here and here).

But there is more.  The NYT report has the rotting odor of yet another Pentagon misinformation operation to lather up the masses using the willing offices of the tired old Gray Lady of journalism.  The oder is intense, because Risen’s Pentagon-inspired geological report coincides with the growing disenchantment with Afghan adventure.  And more people are coming to appreciate the disconnect between (1) a spate of credible reports (e.g., here)  describing the lack of progress in Afghanistan, particularly the failure of the showcase Marja COIN strategy to deliver its predicted result and (2) the requirement imposed by President Obama to show progress by the end of this summer.  Bear in mind, Obama’s ‘requirement’ was imposed on the Pentagon when he improved the flawed McChrystal/Petraeus surge plan and sold it to the American people last fall.  The military and spokesmen for the Obama administration began immediately  to back away from the deadline shortly after its inception, and it has already been stretched to coincide with the mid-term elections in November — which goes to show that domestic politics do not end at the water’s edge?

Although the several commentators expressed their justifiable skepticism about the timing of the NYT report, to the best of my knowledge, none have addressed the substance of the mineral estimate.  Shortly after it was published, my good friend and colleague Pierre Sprey, who has been called a vampire because he does his best work in the dark after midnight, got to the heart of the latter question and put the entire story together in an elegantly brief email that he distributed in the dark early hours of 14 June.

Attached for your reading pleasure is Pierre’s incisive critique:

The timing of this release of ancient mining news–especially when floated with Petraeus’ name plastered all over it in a tried-and-true government propaganda outlet like the N.Y. Times–smells to me like a last ditch attempt to invent an economic justification for hanging on many more years in the hopeless Afghani morass.

Note that the now sacrosanct 1980s Russian mineral survey was “stumbled on” six years ago in 2004 by an American reconstruction team foraging in the Afghan Geological Survey Library. Then, according to the Times’ (read Petraeus and DoD) spin, nothing happened until two years later when the U.S. Geological Survey launched a 2006 aerial mineral survey followed by another in 2007, supposedly yielding all-new evidence of astonishing mineral wealth (iron, gold, copper, lithium, supposedly a trillion dollar’s worth)  just waiting to be tapped. Supposedly, this astonishing new evidence was then ignored by all until a Pentagon business development task force “rediscovered” the ignored USGS mineral data in 2009.

This spin is quite untrue: in 2005, the Afghan government, quite aware of their mineral resources, opened bidding on copper mining leases in Logar Province, bidding that was won by the Chinese in 2007. As for the reliability of the USGS data, note that they report 1.8 billion tons of potential lithium deposits (lithium is very trendy with the greens these days) but only a puny 111 million tons in proven or probable deposits.

But none of this purportedly astonishing USGS aerial survey data has raised much dust in the international mining world, despite the fact that the entire current New York Times scoop was thoroughly covered by Reuters and Mining Exploration News a year ago in April of 2009.

So what turned the ho-hum Reuters news of April, 2009 into a hot Times scoop in June of 2010? Is there any connection with the desperate need of McChrystal, Petraeus and Gates for a life jacket, now that the Afghan surge they floated is sinking so rapidly?

WASHINGTON — The United States has discovered nearly $1 trillion in untapped mineral deposits in Afghanistan, far beyond any previously known reserves and enough to fundamentally alter the Afghan economy and perhaps the Afghan war itself, according to senior American government officials.

The previously unknown deposits — including huge veins of iron, copper, cobalt, gold and critical industrial metals like lithium — are so big and include so many minerals that are essential to modern industry that Afghanistan could eventually be transformed into one of the most important mining centers in the world, the United States officials believe.

An internal Pentagon memo, for example, states that Afghanistan could become the “Saudi Arabia of lithium,” a key raw material in the manufacture of batteries for laptops and BlackBerrys.

And so on….read the full deception.

In the process of sorting through 20 years of documents pertaining to Open Source Intelligence (OSINT), all free to the public, we came across the original language from the Authorization Bill in 2006 that directed the Department of Defense (DoD) to respond with a report outlining how it would establish and enhance OSINT as a separate discipline, inclusive of strategies, plans, capabilities development and so on.

Follow the Frog to the 2006 posting of both the Congressional language and a short Defense News Daily report summarizing what the Authorizors want….

Responds to Hamilton Bean’s “The DNI’s Open Source Center” in IJIC Summer 2007, a copy of which is available on this web site under References.  Click on Frog to go there.

Hamilton Bean, “The DNI’s Open Source Center: An Organizational Communication Perspective.”  The response to this well-intentioned article is available under Articles & Chapters, click on the Frog below to go direct.

Doug Naquin, the senior Central Intelligence (CIA) officer responsible for Open Source Intelligence (OSINT) and for the Open Source Center (OSC), the half-baked replacement for the Foreign Broadcast Information Service (FBIS), is a good person trapped in a bad system.  He not only does not know what he does not know, but is held in multiple strait-jackets by CIA security, CIA legal, and CIA culture.

In November 2005 we recognized the severe damage that Doug Naquin–with the best of intentions–was doing to the US military, and we tried to stop him.  Below is the letter that was sent to the Deputy Director of National Intelligence, General Michael Hayden, USAF.   He ignored the letter.

Naquin is still doing damage.  Apart from misrepresentations to the Combatant Commanders (COCOMs), the personnel exchange is sending unqualified FBIS/OSC people out to the military where they not only have no clue, but they also try to spin everything to CIA’s advantage.  The Department of Defense (DoD) needs to realize that the OSC is not a “full-spectrum” OSINT shop; that it can barely handle CIA’s own internal requirements (and by some accounts, is considered argely worthless among the CIA analysts as well)

This letter was on target.  It is still on target.  It is time for Doug Naquin to do what he does best: stay on campus at CIA and stop messing up the US military with misprepresentations, failures to perform, and exported personnel that are not worth the C Rations it takes to feed them.

General Schoomaker and Congressman Rob Simmons understood each other.  The letter below, from Congressman Simmons to General Schoomaker, was intended to give General Schoomaker an opportunity to instruct LtGen Keith Alexander, then Assistant Chief of Staff for Intelligence , as to his duties.  A change in Army doctrine resulted, and separate Open Source Intelligence (OSINT)doctrine was developed, but developed very badly.  The Army G-2 mafia never took OSINT serioiusly as a separate discipline, and together with the Foreign Broadcast Information Service (FBIS) never growing past its broadcast monitoring role, was a severe impediment to progress in this arena.  LtGen Alexander, today the Director of the National Security Agency (NSA) understood how to use OSINT in support of ABLE DANGER and in support of NSA missions, but he never understood the urgency of making OSINT a discipline in its own right that could be used to support all of the Army’s mission areas, Whole of Government inter-agency planning, programming, and campaign execution, and even less so, coalition and multinational multifunctional operations with Non-Governmental Organizations (NGO), such as the Defense Advanced Programs Agency (DARPA) has consistently supported with its annual STRONG ANGEL exercise.

When Congressman Simmons lost by 80 votes in 2006, in large part because two newspapers in his District did not do their homeword and turned against him for not having “big ideas”–nothing could have been further from the truth–the Army G-2 mafia immediately down-graded OSINT, relegating it to contractors who know nothing of OSINT and refuse to sub-contract experts who do.  With the exception of the OSINT unit at the US Special Operations Command, Army OSINT is totally hosed today, and much in need of a G-2 that understands both “full-spectrum” HUMINT and “full-spectrum” OSINT.  They have no bench from which to find such a person. 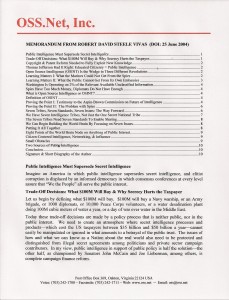