UPDATE 8: A citizen has come in with 20 screen shots that show the White House petition numbers climbing and then dropping back down. We are seeking independent verification but this is a real concern. We are however finding the same “bug” on other petitions. Bottom line is that either the numbers are rigged or the White House is incapable of actually counting all votes.

UPDATE 7: A patriot has created a White House Petition, we need 100,000 votes by 26 March. Since a million of you have read this memo, I hope we can make that goal. Click here to go to White House page. Per Update 8 (graphic below) they may be rigging the numbers down. 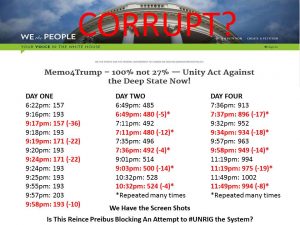 UPDATE 6: EDIT. Bannon is claiming he is not blocking Trump’s consideration of a meeting with Ron Paul, Dennis Kucinich, Cynthia McKinney, and Robert Steele. We are waiting for a definitive invitation.

UPDATE 5: Tip of the Hat to Alert Reader for a bodacious meme graphic at the end of the online memo.

UPDATE 3: Trump has the memo, Bannon is fighting it, Preibus is gone (just a matter of when, I recommend that all the changes be announced at the same time).

UPDATE 1: The President made a huge mistake with McMaster, who is over-rated and has no idea that nine of the ten high-level threats to humanity are not military.


MEMORANDUM FOR THE PRESIDENT

WARNING: You have 30 days to settle the country. A violent “American Spring” looms.

You are under attack on three fronts:

You are not under attack from Iran or Russia – all your existential fights are right here.

There are four things you need to do immediately in order to survive:

There are four things you can do to be the greatest President in modern history.

Background:  Former CIA Spy Has A Surprising Message For Trump 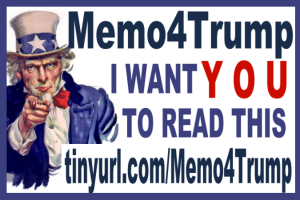 Phi Beta Iota: The primary thrust of the Earth Intelligence Network (EIN) for the past several years has been a combination of electoral reform, intelligence reform, and governance reform. The above letter by EIN Chief Enabling Officer (CeO) Robert Steele, who serves without salary, is intended to support the existing legitimate President of the United States of America with strategic perspectives not now available to the President from those who surround him and filter information to favor their own individual agendas.

All of these ideas were offered to Bernie Sanders (eight times), Martin O’Malley, Michael Bloomberg, and John Kasich. Donald Trump, “the great disruptor,” won against all odds, and is the only person in the US Government (USG) who could conceivably lead a national consensus toward these needed reforms. We pray for his survival and his success. He is literally our only hope at this time — if combined with an earnest outreach program across all 50 states, with a diversified senior team, there is every reason to believe that these reforms are achievable, and that these reforms will Make America Great Again.

There is nothing wrong with America the Beautiful that cannot be fixed, and fixed quick, by restoring the Constitution (including an end to “presidential wars” not authorized by Congress) and by restoring integrity to every aspect of our electoral, intelligence, and governance systems.