It is with great pleasure that I can introduce you to the International Civil Society Network on Infrastructures for Peace (I4P).   The network and website are launched today: www.I4Pinternational.org

Many countries lack capacities and structures to deal adequately with on-going and potential violent conflict. This has emerged as a central obstacle to the attainment of equitable and sustainable development. In recent years, the number of conflicts has been increasing once again. We need comprehensive, inclusive and long-term approaches to peacebuilding, which involves the main stakeholders. Infrastructures for Peace and Local Peace Committees can be important pillars to counter these dangerous developments or substantially reduce their impact.

These months, several interesting articles on I4P are released: in the new Peacebuilding Journal, the Berghof-Handbook Dialogue Series on Peace Infrastructures, in Pensamiento Propio and soon a whole issue on this topic of the Journal of Peacebuilding and Development. Our website will tell you how to find the articles on I4P.

Several local peacebuilding NGOs and practitioners felt the need to exchange experiences and best practices about this approach and make I4P more recognised:the network was born and counts now some seventy members. We have established an Interim Steering Committee with members from three continents.

END_OF_DOCUMENT_TOKEN_TO_BE_REPLACED

OSS ’04: To Mr. Paul van Tongeren, leader, educator, advocate, and pioneer in the prevention and resolution of conflict.  As Executive Director of the European Centre for Conflict Prevention, his is a critical voice in facilitating peace through hinter-disciplinary study, cross-cultural communication, and the creation of Open Source Intelligence (OSINT).

The ECCP received its own award in 2002:

OSS ’02: European Centre for Conflict Prevention. For their consistent and superior efforts to make open sources of information more readily available to those who deal with conflicts and humanitarian emergencies, to include their surveys of conflict prevention and peacebuilding activities, and their lessons learned. Their web site, www.conflict-prevention.net, is a global resource.

Below is the outline of the speaker’s remarks to OSS ’04. 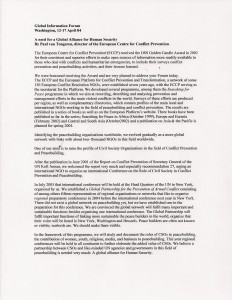