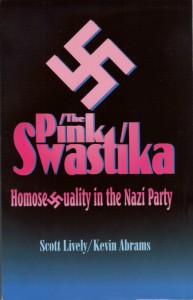 5.0 out of 5 stars Please Appreciate the Difference — Much Misunderstanding Here, March 8, 2013

I humbly offer a clarifying comment based on my broad reading.

There are two kinds of gays and lesbians that I know of:

The “good” kind are those associated with the normal gay and lesbian liberation movement who strive to make gay and lesbian an open, loving, accepting and accepted way of life that is biologically rooted and culturally stable — not seen as a threat by anyone, appreciated the way one appreciates a genius or an artist or someone with a special gift. To the best of my knowledge, this larger movement does NOT reject God, and just as we separate church and state, we should separate biology and theology.

The “bad” kind are those associated with the Nazi Brown Shirts who wanted to make their form of “manly” gay, including pedophilia and sadism against other men, women, children, and animals, what Mrs. Kay Griggs calls the “existentialists” that arose out of a mix of Nazi and French sadists who believe they are above the law, that murder is a form of precision war, and that only those that accept the macho gay cult should be fully trusted and promoted. The really scary part about this group is that they demand that their condition stay in the closet, unknown to others, and this cult appears to have infected the highest ranks of the US Marine Corps, the US Army, the Joint Special Operations Group, the NATO Gladio special channel rooted in Italy (the Vatican Church and very young Italian orphans have played a very special role in the Naples, Milan, and other Mediterranean all male party houses frequented by these people, and in the NY-NJ-CT crime and cloth circuit with Yale’s Skull and Bones and Princetons Cap and Gown secret societies as the axis of evil in America.

I hope that the above comments are helpful. I strongly support the human rights of all peoples irrespective of race, color, creed, or sexual orientation, and I believe that God loves all humans, not just “straight” humans. What causes me grave concern is the degree to which every institution has become corrupt — academic, civil society including labor unions and religions, commerce including banks in NYC that funded the Nazi movement, government at all levels, law enforcement covering up for and participating in very evil networks of pedophilia, drug running, money laundering, and arms trafficking, media refusing to report on these things, military infected at the highest levels, and non-government/non-profits that spot, assess, and recruit very young orphans, channeling them into global pedophilia networks.

WAKE UP PEOPLE! There is a Nazi hydra in the USA that is totally embraced by the criminally insane financial terrorists that have bought the entire US Government across all three branches — the Supreme Court and its Citizens United ruling is an abonimation; the US Chamber of Commerce and Jutice Powell’s long term campaign to equate corporations with citizens (bearing in mind that corporations operate under public charters) is a long running criminal scam; the Congressional sleazebags in the two-party tyranny that blocks the six other parties and all independents from power, while borrowing a trillion a year and taking a 5% cut from every earmarked program, is a long running criminal scam; what the executive does in our name and at our expense, from drones and special operations teams murdering with impunity and without due process, to the beheading of Americans by Americans in false flag terrorist operations, all a long-running criminal sttrocity.

The US Government no longer represents the public. The vast majority of the good people trapped in the very corrupt system we call the US Government have no idea that they are nothing more than window dressing for massive treason across every Cabinet department. This book is a small part of a larger mosaic that connects the “evil” cultish secret society form of homosexuality as sadism and atheism, with the white elite pedophiles and the intersection of criminal gangs and the Vatican. These people over-reached in their rush to hollow out America and loot the US economy — they forgot about guns in the hands of patriots, and they under-estimated the speed with which the Internet would displace the corrupt watered down educational system that fails to teach reality, only “approved” history with its complete ignorance of the role throughout history that financial secret societies have played in using governments to control populations.

Learn more by searching for this story:

Edward Lansdale’s Cold War (Culture, Politics, and the Cold War)
The Nazi Hydra in America: Suppressed History of a Century
War Is A Racket
The Sorrows of Empire: Militarism, Secrecy, and the End of the Republic (The American Empire Project)
The Terror Factory: Inside the FBI’s Manufactured War on Terrorism
The Secret Team
The Trial of Henry Kissinger
Vice: Dick Cheney and the Hijacking of the American Presidency
JFK and the Unspeakable: Why He Died and Why It Matters
Dark Legacy