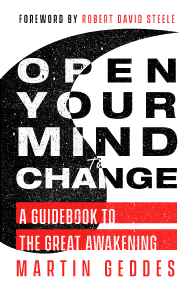 I wrote the Foreword, which you can read at the book’s original post (it is also offered free online at the author’s website but I have ordered the hard copy as a collector’s item and recommend you do as well).

END_OF_DOCUMENT_TOKEN_TO_BE_REPLACED

This is a series of short essays in a half size tiny book.  It is a fast read but it is powerful — an American manifesto against treason.

The sections are Outside the Swamp; Collusion Delusion; The Fake News Complex; The Disinformation Funnel; and Information Desert.

He is strongest on the degree to which the Democrats, the CIA and FBI, and the media — both mainstream and social — have become a cancer within America.

He fails to see that the United Kingdom is our enemy — MI-6 and MI-5 were full participants in the treason against our President, and the UK needs to be held accountable for that act of war.

As I write this MI-6 and MI-5 are holding an internal review to determine what was said on every encrypted voice call to Brennan and Comey. They now know that we have all of those calls “in the clear” and in his own good time President Trump is going to bring the UK a Day of Atonement — perhaps including an end to the Commonwealth and freedom for each of the countries now enslaved by the UK and its controlled the Rothschild owned City of London.

Spin up the fat lady.  Time for a song.

6 Stars: A Superb Prequel to the  Durham Indictments*

* Upgraded from 5 to 6 on basis of reader inputs related to the enormity of the crimes that our President has survived, with Mike Flynn’s help.

The author is expert on this topic in part because he wrote the New York Times bestseller The Plot Against the President: The True Story of How Congressman Devin Nunes Uncovered the Biggest Political Scandal in U.S. History.

I was most pleasantly surprised by the author’s excellent treatment of General Mike Flynn, whom I know. From the beginning of the book where the author makes it clear that Mike Flynn took a bullet for the President, to the concluding chapter where he celebrates Mike Flynn’s inevitable exoneration, the hero in this book is Mike Flynn.

END_OF_DOCUMENT_TOKEN_TO_BE_REPLACED

A Lie Too Big To Fail: The Real History of the Assassination of Robert F. Kennedy, by Lisa Pease
Edward Curtin in Unz Review

The assassination of the top four leaders of the political left in the five year period – President John Kennedy in 1963, Malcolm X in 1965, and Martin Luther King, Jr. and Senator Robert Kennedy in 1968 – represented nothing less than a slow-motion coup on the political scene.

END_OF_DOCUMENT_TOKEN_TO_BE_REPLACED 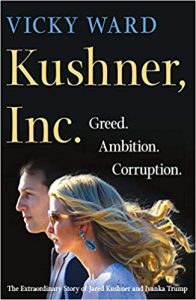 As a professional intelligence officer with counterintelligence experience, there is absolutely no question in my mind but that my CIA colleagues were 100% on the money when they denied Jared Kushner the security clearances necessary to be effective in the White House, the pinnacle of national and global power. This book provides the public with – in effect – a national counterintelligence threat study on a single individual who is, apart from being completely incompetent – an active traitor who is in active violation of multiple financial fraud, tax evasion, and real estate compliance laws. Kushner is, among many odious things including being an agent of more than one foreign power, a slum lord suing his impoverished tenants in New York and Baltimore for sums that are beneath contempt. In passing it reveals his wife, the President’s daughter, for the vacuous entitled beauty that she is.