At least, that’s what the research fellows at Macquarie University asked for when he first stepped on board as CIO in late 2009. The proliferation of Microsoft Excel documents, changed countless times and shared between any number of siloed departments at the institution, had created “islands of data” that made one of his first challenges a seemingly insurmountable one.

Nearly 18 months later, and with nine months of development under the belt, the first release of the solution — Datamart — was pushed out to university staff in April this year. The offering, built upon Web-based software offered by Melbourne outfit Yellowfin, replaced multiple business intelligence systems and, of course, the spreadsheet.

Bailey says the second year is all about leveraging the data often hidden under illusions of protection by university staff, and leveraging the infrastructure the IT team worked hard to replace in his first year at the institution.

Bailey’s first year has been characterised by his challenge to form what is now known as the Informatics team and pursue technology goals centred around students and staff, rather than controlling the technology. The department has been split into nine groups, with Bailey heading the federation of those groups under his overarching strategy. 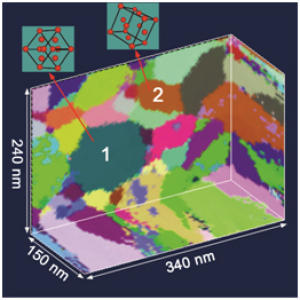 Three-Dimensional Orientation Mapping in the Transmission Electron. This image shows the arrangement of crystals in a 150nm thick nanometal aluminium film. The crystals have identical lattice structure (arrangement of atoms) but they are orientated in different ways in the 3-D sample as illustrated by the labels 1 and 2.

The colours represent the orientations of the crystals and each crystal is defined by volumes of the same colour. The individual crystals of various sizes (from a few nm to about 100 nm) and shapes (from elongated to spherical) are clearly seen and mapped with a resolution of 1 nanometer.

Looking Inside Nanomaterials in 3-D

ScienceDaily (May 16, 2011) — Scientists from Denmark, China and USA have developed a new method for revealing 3-D images of the structure inside a material.

A CLOSE LOOK AT THE THOMAS DRAKE CASE

An insightful account of the pending prosecution under the Espionage Act of former National Security Agency official Thomas A. Drake appears this week in The New Yorker.  Author Jane Mayer delves deeply into the origins of the case stemming from Drake’s critical view of NSA management and surveillance practices. She explores the unfolding consequences of the case and its larger significance.

Among the article’s many striking observations on the Drake case is the concluding quote from Mark Klein, a former AT&T employee who exposed warrantless surveillance activity by the Bush Administration. “I think it’s outrageous,” he says. “The Bush people have been let off. The telecom companies got immunity. The only people Obama has prosecuted are the whistle-blowers.”

Photo Caption:  Drake, a former senior executive at the National Security Agency, faces some of the gravest charges that can be brought against an American citizen. Photograph by Martin Schoeller.

The future of the library

What is a public library for?

First, how we got here:

Before Gutenberg, a book cost about as much as a small house. As a result, only kings and bishops could afford to own a book of their own.

This naturally led to the creation of shared books, of libraries where scholars (everyone else was too busy not starving) could come to read books that they didn’t have to own. The library as warehouse for books worth sharing.

Only after that did we invent the librarian.

The librarian isn’t a clerk who happens to work at a library. A librarian is a data hound, a guide, a sherpa and a teacher. The librarian is the interface between reams of data and the untrained but motivated user.

After Gutenberg, books  got a lot cheaper. More individuals built their own collections. At the same time, though, the number of titles exploded, and the demand for libraries did as well. We definitely needed a warehouse to store all this bounty, and more than ever we needed a librarian to help us find what we needed. The library is a house for the librarian.

END_OF_DOCUMENT_TOKEN_TO_BE_REPLACED

The Art of Economic Complexity


A new way to visualize a country’s development.

Graphic by CÉSAR A. HIDALGO and ALEX SIMOES

EXTRACT: Strip away the mathematical language of economists, and conventional theories of economic growth are rather crude. Economies produce “stuff,” and if you want more stuff to come out of the process, put more stuff in (like human capital, say). Yet economies do not produce stuff so much as billions of distinct types of goods — perhaps 10 billion, according to Eric Beinhocker of the McKinsey Global Institute — ranging from size 34 dark stonewash bootcut jeans to beauty therapies involving avocado. The difference between China’s economy and that of the United States is not simply that China’s is smaller; it has a different structure entirely.

Phi Beta Iota: This is a very promising line of inquiry.  It does not include the vital but poorly understood interactions among political-legal (integrity), socio-economic (fairness), ideo-cultural (education), and techno-demographic (balance), and natural-geographic (true cost, sustainability).  As with most intellectual work these days, it is a thin slice across one dimension of very complex sphere–the world is NOT flat.

Please spread link to this short [4 minute] video if you feel inspired!

From Kyle Thiermann, Surfing for Change:

I’m excited to announce the release of my new movie “Where is Away: Solving
Plastic Pollution in 4 Minutes”.   It tracks a plastic bag that I use in my hometown of Santa Cruz California, all the way to the north shore of Oahu, demonstrating both the destruction and solutions along the way. Famous musician Jack Johnson, and Story of
Stuff Annie Leonard join me in this fast-paced journey to highlight the power we all have to end plastic pollution.

Where is Away: Solving Plastic Pollution in 4 minutes