Phi Beta Iota: The idea of one mobile per person was originally devised by the Earth Intelligence Network, and is articulated in both brief form and in a full-length book.  Now the idea is emerging, spontaneously, from others.  Below is a link to a letter in the Journal of Health Informatics in Developing Countries.

Letter: One mobile per child: a tractable global health intervention

The authors, Prajesh Chhanabhai and Alec Hold, one working at the University of Otago in New Zeland, the other for the Department of Economic and Soical Affairs in the United Nations, make several important points, not least of which is the price point: mobile telephones are being offered in Venezuela for $15, which is half the price the World Bank negotiated with Motorola.

If and when the Chinese see the opportunity (free cell phone, no extra charge for listening in), we should see both free cell phones and eventually free airtime as well as free call centers to educate the poor “one cell call at a time” at the same time that we recoup the investment in elevated national productivity, now proven to be associated with the diffusion of cell phone access.

It merits observation that the cell phone is now the “gift of life” that any one of the one billion rich (80% of whom do not give to charity now) can endow, down to a specific person in a specific village.  The sooner we make cell phones ubiquitous, the sooner we can start exposing corruption at all levels (with web sites that make sense of text messages and expose corruption in near-real-time “by name,” and also creating infinite wealth among the four billion at the “bottom of the pyramid.”  The human brain is the one inexhaustible resource we have, giving every human a cell phone is the fastest way to harnessing the distributed intelligence of the Whole Earth.

Interesting Side Note: Carlos “slim” Helu (richest person in the world) has a major stake in Tracfone (some phones go for $10). He could be a major player in the one mobile per child campaign. Venezuela president Hugo Chavez has a Twitter account and the Earth Intelligence Network just posted >>  earthintelnet @chavezcandanga “the Vergatario” ($15 phone) + Carlos “Slim” Helu ? https://phibetaiota.net/?p=25785 #Vergatario #Venezuela #CarlosSlim 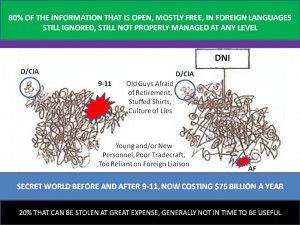 On Dennis Blair’s last day in office as director of national intelligence, the Obama administration seems more stymied than ever in its efforts to replace him.

Following a torrent of criticism from Capitol Hill—apparently touched off by this Declassified interview with Rep. Pete Hoekstra, the House Intelligence Committee’s top Republican—the candidacy of James Clapper looks doubtful to say the least. On top of Hoekstra’s criticism of the retired three-star general, who currently serves as the Defense Department’s intelligence chief, the Senate Intelligence Committee’s leaders are now also publicly saying they think he’s the wrong man for the job.

The latest boomlet in speculation on potential candidates is centered on Michael Vickers, a former Green Beret and CIA operative who has been the Defense Department’s top civilian in charge of counterterrorism and special-operations programs slnce late in the Bush administration. Vickers was one of 15 potential DNI candidates we identified when news of the job opening broke….

But other names keep coming up. Some, such as Homeland Security undersecretary Rand Beers, Joint Chiefs of Staff Deputy Chairman Gen. James Cartwright, and outgoing Sen. Evan Bayh, have surfaced before (one former official who worked in national security positions with Beers describes him as “indefatigable”). But others are new to this particular search, including Rep. Jane Harman, former Ambassador to Iraq Ryan Crocker, and former CIA deputy director John McLaughlin. 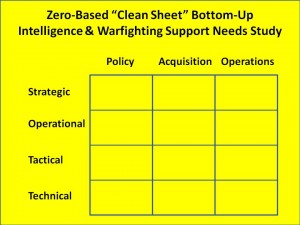 Phi Beta Iota:  Worth a complete read.  Here are the fifteen potential DNI’s they identified earlier:, followed by our picks. 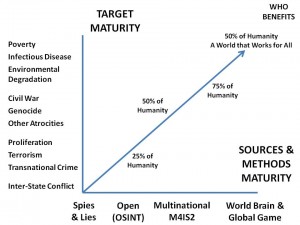 Phi Beta Iota:  Everyone in the above lists is a ridiculous untenable suggestion with one exception: Senator Chuck Hagel.  His combination of integrity, substantive experience, standing on the Hill, and general non-partisan common sense, is ideal.  What he lacks is a kick-ass deputy who actually understands all the crap that the agencies–and their den mother Jim Clapper–put forward.  Leon Panetta would actually be very good as the Deputy, responsible for turning off all funds to all agencies at 20% a year (10% a year restored for new initiatives; savings to education and national research under DNI oversight as provided for in the Smart Nation-Safe Nation Act) but Hagel is going to need a kitchen cabinet of truth-tellers and we are pretty sure he is not even aware of who they might be.  That is his sucking chest wound–if he solves that he will not only earn Obama a second term, he will transcend politics and impact directly on the totality of all budgets–US, state & local, other nations, corporations, NGOs.  Jack Devine is in the wings in New York, the Trilateral Commission’s choice for either DNI or Director of Central Intelligence, he has our vote for the latter position.

The problem President Obama has is in the White House is that no one working for him actually “gets it” with respect to 21st Century governance–between his pogomist and his pollster and his talented but oblivious others, he is running on fumes, will not get a second term, and is simply counting the days to when he can follow Bill Bradley, Al Gore, and Bill Clinton in Goldman Sachs honey-land–and screw the American public, they were never the intended beneficiaries of all this in the first place.

References for any future DNI:

and for the really big picture:

It seems as though we’ve also entered a phase of “micro”. From micro-phones and micro-processors to micro-loans, micro-giving, micro-blogging, and  micro-volunteering. (How will “nano” fit into this?)

Problem:
73% of Americans do not volunteer (2007 US Dept Labor).
Root Cause:
Most volunteer opportunities require vetting, many hours, and a long-term commitment. It’s akin to a second job. For most people, the process is inconvenient, takes too much time, and doesn’t easily fit into hectic lives.Our Theory of Change: Americans have spare time – billions of hours – but in small windows of idle moments: sitting in an airport, waiting in a doctor’s office, riding the bus to work, and more. If we can reach people during these spare moments we harness a huge pool of untapped human energy.To harness micro spare time we must reach people via mobile, but until recently, mobile phones were limited.

The arrival of smartphones like iPhone (with Internet, graphics, camera, GPS, video, audio, and more) created enormous possibilities. 115 million smartphones were sold in 2007 with projections of 700 million by 2012 (WashPost, Aug 2008).The Extraordinaries is smartphone software that allows millions of volunteers to perform tasks on their smartphones in just a few minutes. We make volunteering feel like a video game to encourage repetition and competition. People login to our system from any place on Earth within cell reception, and constructively use small windows of spare time for science, medicine, nonprofits, government, and more. Nearly anything you do on a regular computer you can do on a smartphone.

(I’m sure you can think of many more possibilities)

Panels and keynotes program schedule I was told via email from someone involved in the event that a video will be posted online.I will be posting this over a the Earth Institute blog (especially since it has zero comments for the March 25 event) as a challenge to improve the overall framework of the “State of the Planet 2012”.


State of the Planet 2010 Event Report:
Intro
I attended this bi-annual event in 2008. At that time there was not a global webcast that included panelists located in other countries. At the 2010 event, there was a V.I.P. section closer to the ‘stage’ that I was not notified about. The V.I.P. section had about 3 times more people than the non V.I.P. section which was odd. Despite it being a V.I.P. section, there was never enough time given to them to ask all the questions via microphone. This is a Jeffrey Sachs event, it’s his show. He’s the main advisor to Ban Ki-Moon, and friends with the president of Mexico (who keynoted this event), so it seems to be more from his perspective and his friends. Therefore, it was a very narrow-visioned event that should not be entitled “State of the Planet”. People involved with the publication “State of the Future” for over a decade (www.stateofthefuture.org) were never mentioned, invited, or asked to contribute. Yet, these people have worked with the United Nations for over a decade. Collective intelligence has been written and software is being developed by those involved in the “State of the Future” (Millennium Project), yet Jeffrey Sachs was attributed to the idea of “worldwide brainstorming” for “collective invention”. And unfortunately, there was an obsession at this event on ‘climate change’ and carbon. “Industrialization footprint” involves a broader range of hazards and toxins that needs more air time. More ‘fluid’ thinking was lacking while an excess of a kind of cloned groupthink was prevalent (or ‘carbon copying’ if you will, pun intended). The forum has great potential but as of 2008 & 2010, is too insulated and will not be respected as highly intelligent and strategically effective by a broad range of people (outside of Ivy League Columbia) concerned about serious global issues. On an interesting note, Zbigniew Brzezinski was once a Columbia professor (see Obama video on his Brezinski recognition).
END_OF_DOCUMENT_TOKEN_TO_BE_REPLACED