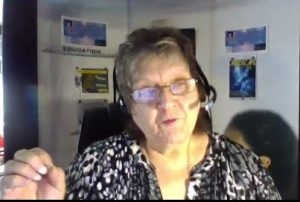 As received via email — a summary message of hope followed by a voice analysis of President Trump at the Alamo.

People are weary, disheartened, they need hope to have the power to self educate and take control of their lives

END_OF_DOCUMENT_TOKEN_TO_BE_REPLACED

Indigenous “intelligence” appears to be making a comeback in public consciousness.

Deena Metzger  is a poet, novelist, essayist, storyteller, teacher, healer and medicine woman who has taught and counseled for over forty years, in the process of which she has developed therapies (Healing Stories) which creatively address life threatening diseases, spiritual and emotional crises, as well as community, political and environmental disintegration.

She has spent a lifetime investigating Story as a form of knowing and healing. As a writer, she asks: Who do we have to become to find the forms and sacred language with which to meet these times?

She conducts training groups on the spiritual, creative, political and ethical aspects of healing and peacemaking, individual, community and global, drawing deeply on alliance with spirit, indigenous teachings and the many wisdom traditions. One focus is on uniting Western medical ways with indigenous medicine traditions.

She is the author of many books, including most recently, the novels La Negra y Blanca and Feral; Ruin and Beauty: New and Selected Poems; From Grief Into Vision: A Council; Doors: A fiction for Jazz Horn; Entering the Ghost River: Meditations on the Theory and Practice of Healing; The Other Hand; Tree: Essays and Pieces, A Sabbath Among the Ruins, Looking for the Faces of God andWriting For Your Life.

In 1988 I ghost-wrote for the Commandant of  the Marine Corps an article that he enhanced and signed, “Global Intelligence Challenges in the 1990’s.”  At that time my focus was on the difference between the conventional threat and the emerging unconventional threat.

Why The Global System is Killing Trust

Trust is an essential building block of any economic and social system.  Systems that attempt to operate without it inevitably fail.  A loss of trust typically preceeds a collapse in legitimacy.

That’s our future.  Here’s why:

Let’s start with a philosopher “king” of crypt0-security, Bruce Schneier.  He has a new book out called Liars and Outliers: Eneabling the Trust that Society Needs to Thrive (Wiley, 2012).

The book is all about the mechanisms for building trust.  There are four mechanisms:

He contends (rightly) that in the modern world, we don’t typically make/have the personal relationships required to build moral and reputational trust.  We typically make impersonal relationships when we interact with a global economic system (you buy stuff made by people you don’t know).  As a result, we rely up on institutional (legal compliance) and security (to guard against bad behavior) to provide the level of trust necessary to make the global economy work.

There are two massive problems with that.

Legal compliance is increasingly a farce.  Take the mortgage settlement the US government and the financial industry reached over rampant fraud in mortgage lending.  I wrote a bit more about it on the Resilient Community blog if you want more detail.   What does this mean?  That even at the national level in a “developed country” it is impossible to use legal means to enforce trustworthiness (let’s not even talk about compliance at the global level).  It’s doesn’t work anymore.  It’s just too easy for anybody with financial means, to buy off country’s legal system for pennies on the dollar (to the damage caused).  The compliance system is broken.

So, that leaves us with security as the only way to prevent bad actors from running away with the global system.  This leads me to a great presentation I heard yesterday by Dan Geer.   He’s another philosopher “king” of crypto-security (but for the CIA).  Very smart guy.   He made a convincing case that security is scaling slower than data, bandwidth, node, and user growth.  It is falling behind and will continue to fall behind as the global system grows.

Upshot:  it’s already nearly impossible to secure big organizations. Every Fortune 500 company has and will continue to compromised. The government’s systems are already a sieve.  There’s almost nothing that can be done about it and it will get increasingly worse. Forget about securing a single person trying to connect to the global system.  They are just sheep ready for slaughter.

So, what happens now?

Is there a solution?  An alternative form of social order that can provide a scalable global solution?

Hey, let the rest of the world sink into the squalor of a trust free world.   It will make that system easier to trounce in head to head competition for people.

The Pentagon and U.S. intelligence community spend billions of dollars each year trying, with mild success at best, to predict the future.

Past intelligence failures have been costly and damaging to U.S. national security. Trying to avoid previous pitfalls, agencies are on a constant treasure hunt for new technologies that might give them an edge.

The Intelligence Advanced Research Projects Activity in February solicited industry proposals for how to improve the accuracy of intelligence forecasting. Under the auspices of the Office of the Director of National Intelligence, IARPA invests in research programs that provide an “overwhelming intelligence advantage over future adversaries.”

Applied Research Associates, a New Mexico-based firm, has launched a program it hopes will improve upon the traditional methods of gathering expert opinion by using computer software that could make better-informed predictions. The system chooses the best sources of information from a huge pool of participants.

ARA won the bid and started working on its Aggregative Contingent Estimation System, or ACES, in May.

Phi Beta Iota:  A more nuanced understanding, from 55 top authors in the field, can be found in COLLECTIVE INTELLIGENCE: Creating a Prosperous World at Peace (Earth Intelligence Network, 2008).

Lauren Anderson: the “We” of the our collaborative age will replace the “Me” of the industrial age

“Is this shift from the Me to the We as significant as the industrial revolution? And should we welcome this revolution with, so to speak, open arms?”

As originally posted by Michel Bauwens.