Like a car careening down a mountain road, we seem unable as a people and as a nation to gain control of our government and to make it serve national wellness instead of profit. Day after day these stories track the degradation of our quality of life.

Only mass demonstrations and mass voting is going to change this, and we seem to lack the political will as citizens to do either. We hate Congress, but most love their Congressperson, seeing no contradiction.

Our children are obese because of the “foods” they eat. They have diabetes because of the high fructose corn syrup. We have girls experiencing menarche at 9, and breast development at 10 because of the hormones they unwittingly absorb because of industrial animal husbandry. And now we are discovering a growing number of them are autistic. The list goes on an on, all resulting from a society that is structur! ed for maximum profit for the few.

END_OF_DOCUMENT_TOKEN_TO_BE_REPLACED

This is the latest in the Homo Superiorus Trend. I predict this is going to become a major issue very quickly.

Here is why movements like the Tea Baggers, the modern version of the Know Nothings who plagued America in the 19th century, prosper. Willful Ignorance is like a dark cloud spreading across the nation. This essay is too polemic, but the points it makes are sound.

This report details the failure of Social Progressives to achieve traction in making change. I write regularly about the Willful Ignorance of conservatives, but it has its counterpart in the Willful Ignorance of Social Progressives. They don’t like to hear bad news, or things that have “negative vibes.” Over the years a lo! ng list of progresives have told me that they started, but did not continue, to read SR because “I don’t want to pollute my mind with the negativity you publish.” When I point out that they are facts one needs to be aware of if one is to make rational choices they smile and say, “Oh, I don’t want to know about all that, it’s too much of a downer.” As a result of this attitude social progressives, given their numbers, have made a disproportionately small impact on the major trends affecting our society.

Historically the only group of progressives that seems to understand how real social change is created are the Quakers, who look truth in the eye and, then, work to change it, however long it takes.

BAD:  Amanpour on Iraq: Where Were the Journalists?
DAVID FERGUSON – The Raw Story

UGLY:  The Last Letter: A Message to George Bush and Dick Cheney From a Dying Veteran
TOMAS YOUNG – Truthdig

If, as Fyodor Dostoevsky wrote, “the degree of civilization in a society can be judged by entering its prisons” then we are a nation of barbarians. Our vast network of federal and state prisons, with some 2.3 million inmates, rivals the gulags of totalitarian states. Once you disappear behind prison walls you become prey. Rape. Torture. Beatings. Prolonged isolation. Sensory deprivation. Racial profiling. Chain gangs. Forced labor. Rancid food. Children imprisoned as adults. Prisoners forced to take medications to induce lethargy. Inadequate heating and ventilation. Poor health care. Draconian sentences for nonviolent crimes. Endemic violence.

This is the latest on the major trend concerning the American media. Not a happy story. A democracy requires a healthy functional objective media to be healthy itself. The trend seems to be moving against this.

This adds up to a news industry that is more undermanned and unprepared to uncover stories, dig deep into emerging ones or to question information put into its hands. And findings from our new public opinion survey released in this report reveal that the public is taking notice. Nearly one-third of the respondents (31%) have deserted a news outlet because it no longer provides the news and information they had grown accustomed to.

Here is what is coming. Where is the leadership to address this?

Researchers caution that plant growth in the north may not stay on its current trajectory because an amplified greenhouse effect will increase the frequency of forest fires, droughts and pest infestations.

Reporting in the journal Nature Climate Change, an international team of researchers writes that the northern latitudes have experienced a significant reduction in temperature and vegetation seasonality. They contend that vegetation growth at Earth’s northern latitudes is starting to look a lot like the green latitudes to the south. The study’s findings are based on a 30-year record of land surface and satellite data sets.

Lead co-author Liang Xu, a Boston University doctoral student, says that increased warming in the northern latitudes above the Canada-USA border is lowering temperature seasonality because the colder seasons are warming faster than the summer.

This piece illustrates for me the difference between religion (The Roman Catholic Church) and spirituality.

I was stunned to learn, and checked and it is correct: “Less than five percent of money flowing through Catholic charities and hospitals comes from Catholic offering plates. Powerful Christian organizations have secured government funds to underwrite” their costs.

This essay gave me pause and made me think, and I hope it does the same for you. 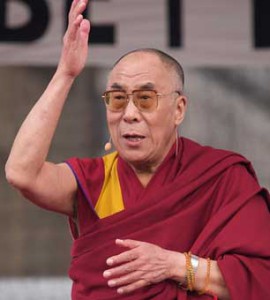 Despite Vatican efforts to keep the public eye focused on pomp and circumstance, speculation about the real reason for Pope Benedict’s resignation dominates conversation about the papal succession: Is it the Vatileaks money laundering? Is it the pedophilia scandal? Might it have something to do with criminal charges filed in European courts? How about the impact of all three on Catholic Church coffers and pews? Is this about immunity or power or finances or brand management?

The Vatican claims to promote a “comprehensive culture of life,” but it is the Church’s comprehensive culture of corruption that refuses to die. Consider yesterday’s scandal in which Scottish Cardinal Keith O’Brien, resigned amid allegations of sexual contacts with priests. Last year O’Brien had called marriage equality a “grotesque subversion of a universally accepted human right.” In fact, in 2012, he received a “bigot of the year” award from the British gay rights group, Stonewall. The combination makes him a poster boy for the notion that homophobia is a symptom of denial. Methinks he doth protest too much.

From the October death of Savita Halappanavar for lack of an abortion in Catholic controlled Ireland, to the pedophilia cover-up being unveiled gradually this spring in California, to the infighting exposed when the Pope’s butler leaked inside Vatican documents, to Cardinal Timothy Dolan’s efforts to obstruct contraceptive access regardless of the public health consequences—Catholic priorities increasingly appear to have two products: harm and hypocrisy. Those who still consider the Catholic hierarchy to be a source of moral leadership are living in a fantasy.

As someone who thinks the world could use a little moral leadership, I can’t resist indulging in a little fantasy of my own: Imagine how different things would be if the Dalai Lama were the next pope.