EDIT of 5 Dec 2010 to add commentaries by various others.

Julian Assange, the founder of WikiLeaks, had moved 37 times by the time he reached his 14th birthday. His mother didn’t enroll him in the local schools because, as Raffi Khatchadourian wrote in a New Yorker profile, she feared “that formal education would inculcate an unhealthy respect for authority.”

She needn’t have worried. As a young computer hacker, he formed a group called International Subversives. As an adult, he wrote “Conspiracy as Governance,” a pseudo-intellectual online diatribe. He talks of vast “patronage networks” that constrain the human spirit.

Far from respecting authority, Assange seems to be an old-fashioned anarchist who believes that all ruling institutions are corrupt and public pronouncements are lies.

Read the rest of this revealing assessment….

Phi Beta Iota: We like David Brooks.  He’s less submissive than David Ignatius, less pretentious than Fareed Zakaria, and generally has something interesting to say.  In this piece, most revealingly, he displays his limitations to the fullest.  We are quite certain that David Brooks means well, but the depth of his naivete in this piece is nothing short of astonishing.  The below lists of lists of book reviews will suffice to demonstrate that David Brooks is not as well-read as he needs to be, not as intellectual as he pretends to be, and not at all accurate in his assessment of Julian Assange.  We share with Steven Aftergood of Federation of American Scientists (FAS) concerns about Assange’s judgment in releasing some materials that are gratuitous invasions of rightful privacy, but we also believe that Assange is finding his groove, and the recent cover story in Forbes captures that essence.  WikiLeaks is an antidote to corporate fascism and elective Empire run amok.  It meets a need.

Other Commentaries on the Same Article:

END_OF_DOCUMENT_TOKEN_TO_BE_REPLACED

What do you think WikiLeaks mean for business? How do businesses need to adjust to a world where WikiLeaks exists?

WikiLeaks means it’s easier to run a good business and harder to run a bad business, and all CEOs should be encouraged by this. I think about the case in China where milk powder companies started cutting the protein in milk powder with plastics. That happened at a number of separate manufacturers.

Let’s say you want to run a good company. It’s nice to have an ethical workplace. Your employees are much less likely to screw you over if they’re not screwing other people over.

Then one company starts cutting their milk powder with melamine, and becomes more profitable. You can follow suit, or slowly go bankrupt and the one that’s cutting its milk powder will take you over. That’s the worst of all possible outcomes.

The other possibility is that the first one to cut its milk powder is exposed. Then you don’t have to cut your milk powder. There’s a threat of regulation that produces self-regulation.

No one wants to have their own things leaked. It pains us when we have internal leaks. But across any given industry, it is both good for the whole industry to have those leaks and it’s especially good for the good players.

But aside from the market as a whole, how should companies change their behavior understanding that leaks will increase?

Do things to encourage leaks from dishonest competitors. Be as open and honest as possible. Treat your employees well.

Would you call yourself a free market proponent?

Absolutely. I have mixed attitudes towards capitalism, but I love markets. Having lived and worked in many countries, I can see the tremendous vibrancy in, say, the Malaysian telecom sector compared to U.S. sector. In the U.S. everything is vertically integrated and sewn up, so you don’t have a free market. In Malaysia, you have a broad spectrum of players, and you can see the benefits for all as a result.

How do your leaks fit into that?

To put it simply, in order for there to be a market, there has to be information. A perfect market requires perfect information.

There’s the famous lemon example in the used car market. It’s hard for buyers to tell lemons from good cars, and sellers can’t get a good price, even when they have a good car.

By making it easier to see where the problems are inside of companies, we identify the lemons. That means there’s a better market for good companies. For a market to be free, people have to know who they’re dealing with. 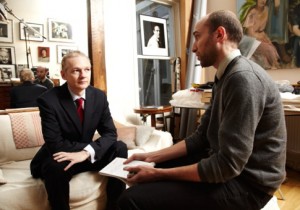 You’ve developed a reputation as anti-establishment and anti-institution.

Not at all. Creating a well-run establishment is a difficult thing to do, and I’ve been in countries where institutions are in a state of collapse, so I understand the difficulty of running a company. Institutions don’t come from nowhere.

It’s not correct to put me in any one philosophical or economic camp, because I’ve learned from many. But one is American libertarianism, market libertarianism. So as far as markets are concerned I’m a libertarian, but I have enough expertise in politics and history to understand that a free market ends up as monopoly unless you force them to be free.

WikiLeaks is designed to make capitalism more free and ethical.

But in the meantime, there could be a lot of pain from these scandals, obviously.

Pain for the guilty.

Do you derive pleasure from these scandals that you expose and the companies you shame?

It’s tremendously satisfying work to see reforms being engaged in and stimulating those reforms. To see opportunists and abusers brought to account.

Thanks to: Dan Drasin via John Steiner.

MalwareIntelligence is a site dedicated to the investigation of crimes committed using the Internet as the main channel of attack. Also, anything that involves maneuvering and criminal activities in this area, covering a wide spectrum in the field of computer criminology.

The mission is to work in a completely disinterested in the continuous improvement in prevention to security incidents that allow for timely contingency threats.

Thus MalwareIntelligence behind is a group of professionals in research, intelligence and information security, which fuse the various processes involved in these disciplines to offer exclusive content, quality and high value for the resolution of computer crime.

MalwareDisasters is devoted to analyzing malicious code from a purely involved in intelligence processes. The content expressed in this division refers mainly to activities “visual” of malware.

SecurityIntelligence channels information on information security, also from the standpoint of intelligence processes, resulting in a high-value content to understand the need to merge Intelligence in Information Security.

Thanks to Alexander Heid’s talk at the Next Hope called “Modern CrimeWare Tools and Techniques: An Analysis of Underground Resources” – Download Audio: 16kbps or 64kbps

Bynamite – rethinking privacy, is it the modern day Madonna-Whore complex?

Not familiar with these companies?  You should be, because they are plotting the course for the future of internet privacy and how we interact with people and merchants.

Bynamite is just the latest and there is a very good article about them here.  In short, Bynamite has (correctly, in my opinion) seen that each time we conduct a search on the internet, the search itself is a transaction because it gives merchants and the search engines more information about our interests, tastes, and needs.  Bynamite also thinks that this sort of profile information will in short order play a very real role in the prices we pay for goods and the kinds of coupons we get.  I think they are right about that as well – and this by itself is one of the most fundamental changes in the world of commerce to come along in a very long time – a set of one, or many, micro transactions prior to the primary transaction(s) that then inform the price we pay for future transactions – in essence context-rich transactions.

Science fiction never imagined Google, but it certainly imagined computers that would advise us what to do. HAL 9000, in “2001: A Space Odyssey,” will forever come to mind, his advice, we assume, eminently reliable — before his malfunction. But HAL was a discrete entity, a genie in a bottle, something we imagined owning or being assigned. Google is a distributed entity, a two-way membrane, a game-changing tool on the order of the equally handy flint hand ax, with which we chop our way through the very densest thickets of information. Google is all of those things, and a very large and powerful corporation to boot.

We have yet to take Google’s measure. We’ve seen nothing like it before, and we already perceive much of our world through it. We would all very much like to be sagely and reliably advised by our own private genie; we would like the genie to make the world more transparent, more easily navigable. Google does that for us: it makes everything in the world accessible to everyone, and everyone accessible to the world. But we see everyone looking in, and blame Google.

END_OF_DOCUMENT_TOKEN_TO_BE_REPLACED

The National Geospatial-Intelligence Agency (NGA) has a requirement to provide a secured, hosted environment that provides web-based access to geospatial visualization services and Open Geospatial Consortium complaint web service interfaces. The Schedule of Supplies/Services provides for the period of performance from 20 September 2010 through 19 September 2011 and two 12-month option years.

This acquisition is for Commercial Geospatial Visualization Services for NGA. Google is the only source that can meet the Government’s requirement for worldwide access, unlimited processing, and Open Geospatial Consortium complaint web service interfaces. See Full National Geospatial-Intelligence Agency Release
|

“Do Not Track Me” gains traction in Washington

“What They Know” Series by the Wall Street Journal

“Most of my sources say that Google and Facebook have been bankrolled by the NSA and CIA vendors and they are in complete collusion with each other. I believe Americans will live to regret their participation with Facebook and Google.”  –Glen Woodfin (source)