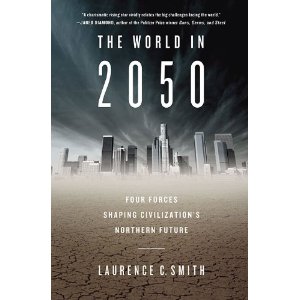 Limits to Growth in the 21st Century

This book was recommended to me and I recommend it to others, but with the following observations:

1) Limits to Growth: The 30-Year Update was there in the 1970’s. It troubles me, as much as I read, how I seem to see the same books every ten years as someone reinvents knowledge that was known before and then either not read, or forgotten.

2) I completely agree with the Deep North concept (the Pacific Northwest Passage is opening, Iceland is now independent of Denmark, and the Yukon and Northwest Territories, along with Alaska, stand to be the main beneficiaries. Similar benefits will acrue around the South Pole, if Chile and Argentina get smart and throw Wall-Mart out of their oceans and off the continent.

END_OF_DOCUMENT_TOKEN_TO_BE_REPLACED

UPDATE of 22 Aug 2010 to add Viral Video (John Pourdehnad)  that started the dialog.

There is a discussion underway at Systems Community of Inquiry focused on developing the concepts for a network of Ackoff Virtual Inqiry Centers (AVIC) located around the world. Early on, the original vision for AVIC, offered by Dr. John Pourdehnad, was that AVIC serve as a nervous system for the Systems and Design Community in Dr. Russell Ackoff’s name. With this belief, Dr. Pourdehnad also made clear the need for AVIC to be designed Ideally and created by the stakeholders themselves. The concept is being extended by Gene Bellinger and Kent Myers.  The work of Clay Shirky is most helpful:

(1)  I’ve seen some of the surveillance video on CNN; here is a link to more.

(2)  Regardless of who ran the operation, sounds like the Hamas guy needed to go;

(3) in addition to surveillance and biometrics, proliferation of commercially-available databases such ChoicePoint  creates additional operational challenges.)

The practice of secretly assassinating purported enemies of the state — an age-old tool of foreign policy — has run up against steadily improving international police collaboration and the global proliferation of surveillance technologies that make it harder for anyone anywhere to surreptitiously conduct a high-profile killing on foreign soil.

In Doha, London and now Dubai, political killers have been caught on film and tracked, provoking unexpected attention and controversy for the organizers. Because of new biometric technologies, the proliferation of cheap video, and sophisticated monitoring of customs points and airports, the skills of those who specialize in the creation of fictional identities have been tested, and sometimes defeated.

The apparent political killing of Hamas operative Mahmoud al-Mabhouh has ricocheted around the world in recent days after his alleged attackers were spotted by a camera above an elevator at the Dubai Al-Bustan Rotana hotel, in the United Arab Emirates. Four suspects, all obvious weight-lifters, were filmed exiting in pairs and heading for Mabhouh’s room.

Shortly after the killing, they were again filmed, this time more nervously boarding the same elevator, wearing the same baseball caps. Then they were filmed again, leaving the airport on flights to Europe, Africa and Asia. On Thursday, Interpol issued warrants for 11 suspects after the Dubai police conducted a careful study of their videotaped movements at nearly a dozen locales. Their mug shots had already been flashed on television screens around the world.ed to this report.

“There’s a scholar who talks about ‘heart’s ease,’ ” Albrecht told me as we sat in his car on a cliff above the Newcastle shore, overlooking the Pacific. In the distance, just before the earth curved out of sight, 40 coal tankers were lined up single file. “People have heart’s ease when they’re on their own country. If you force them off that country, if you take them away from their land, they feel the loss of heart’s ease as a kind of vertigo, a disintegration of their whole life.” Australian aborigines, Navajos and any number of indigenous peoples have reported this sense of mournful disorientation after being displaced from their land. What Albrecht realized during his trip to the Upper Valley was that this “place pathology,” as one philosopher has called it, wasn’t limited to natives. Albrecht’s petitioners were anxious, unsettled, despairing, depressed — just as if they had been forcibly removed from the valley. Only they hadn’t; the valley changed around them.

In Albrecht’s view, the residents of the Upper Hunter were suffering not just from the strain of living in difficult conditions but also from something more fundamental: a hitherto unrecognized psychological condition. In a 2004 essay, he coined a term to describe it: “solastalgia,” a combination of the Latin word solacium (comfort) and the Greek root –algia (pain), which he defined as “the pain experienced when there is recognition that the place where one resides and that one loves is under immediate assault . . . a form of homesickness one gets when one is still at ‘home.’ ” A neologism wasn’t destined to stop the mines; they continued to spread. But so did Albrecht’s idea. In the past five years, the word “solastalgia” has appeared in media outlets as disparate as Wired, The Daily News in Sri Lanka and Andrew Sullivan’s popular political blog, The Daily Dish. In September, the British trip-hop duo Zero 7 released an instrumental track titled “Solastalgia,” and in 2008 Jukeen, a Slovenian recording artist, used the word as an album title. “Solastalgia” has been used to describe the experiences of Canadian Inuit communities coping with the effects of rising temperatures; Ghanaian subsistence farmers faced with changes in rainfall patterns; and refugees returning to New Orleans after Katrina.

Phi Beta Iota: Seriously good stuff that comes at the same time that human feelings and emotions are being recognizes as co-intelligence to the science and humanities and (more or less moribund) social sciences.  It’s about the Whole.

December 16, 2009
Dacher Keltner, Jason March, Jeremy Adam Smith
This is a truly extraordinary collection of essays from the magazine Greater Good, a magazine I had no idea existed. The editors have done a tremendous job in selecting 35 essays (click on the cover above to see the Table of Contents and over all I am hugely impressed.

Multiple literatures are in convergences, from the consciousness side to the global brain side to the waging peace side. I arrived at this book from the “beyond genes to culture” side, and list ten other recommended books spanning those literatures at the end of this review.

+ Science stories include evolutionary studies on peacemaking; neuroscientific experiments; and research into hormones like oxytocin that promote trust and generosity, meaning that kindness really is its own reward and that it is contagious

END_OF_DOCUMENT_TOKEN_TO_BE_REPLACED

The President says the Constitution is defective, and now Senator Harry Reid is preparing the coup de grace. Once Reid and Obama emerge from their transparent closed-door consultations on how to blend the two competing Senate Health Care bills, Senator Reid has a nifty parlor trick up his sleeve.   . . . . . .The plan to railroad Obamacare through was initially reported last week by Huma! n Events and The Heritage Foundation, and has now been confirmed by Senator Reid’s office.Here is Senator Reid’s plan in a nutshell, from CNS News:   A senior aide to Senate Majority Leader Harry Reid (D-Nev.) told CNSNews.com that it is “likely” that Reid will use H.R. 1586-a bill passed by the House in March to impose a 90-percent tax on bonuses paid to employees of certain bailed-out financial institutions-as a “shell” for enacting the final version of the Senate’s health care bill, which Reid is responsible for crafting.The rub here, and the reason Senator Reid has conjured up his little parlor trick, is the Constitution of the United States, Article I, Section 7:   All bills for raising revenue shall originate in the House of Representatives, but the Senate may propose or concur with amendments as on other bills.

END_OF_DOCUMENT_TOKEN_TO_BE_REPLACED

Edit of 20 May 2007 to drop one link (reduntant to Master Gray) and add instead General Zinni’s book on waging peace, our counterpart to the author of this book in terms of intellect, morality, and strategic gravitas.

I defer to the other reviewers on the bulk of the book. It can and should be required reading for some time to come.

Here is the one recommendation in the conclusion that really matters, and I paraphrase:

FROM THE BEGINNING, the national interests and desired outcomes must be considered by a fully integrated team of military and civilian experts with deep strategic, historical, cultural, geographic, and related knowledge, and the use of force must be planned in the context of the desired OUTCOME. The same and related teams must plan for the peace and see the entire program through to the desired END.

This is of course sensible, and not what the Americans did. General Shinseki’s correct appreciation was over-turned by Paul Wolfowitz, a world-class liar living in a fantasy world. General Zinni was called a traitor. General Gavin was dismissed early because Haliburton was not done looting, and preppie Paul Bremer sent in to lose another $20 billion.

Here are other books I recommend, beginning with those from British authors that I consider as remarkable as this one:
Modern Strategy
The Battle for Peace: A Frontline Vision of America’s Power and Purpose
Intelligence Power in Peace and War
Very Special Intelligence: The Story of the Admiralty’s Operational Intelligence Centre 1939-1945
The Rules of the Game: Jutland and British Naval Command
A More Secure World: Our Shared Responsibility–Report of the Secretary-General’s High-level Panel on Threats, Challenges and Change
High Noon 20 Global Problems, 20 Years to Solve Them
The Future of Life
Plan B 3.0: Mobilizing to Save Civilization, Third Edition
The leadership of civilization building: Administrative and civilization theory, symbolic dialogue, and citizen skills for the 21st century

I imagine General Patraeus will have his own book one day. It’s a pity all the flag officers (both US and UK) drank the kool-aid and let Cheney and his merry band of liars and dim-wits destroy the US Army first–for the price of a good tea, any one of us could have told them the lesson the British Army and other Armies have learned since time immemorial: it takes a big war force two years (for slow learners, five years) to re-learn counter-insurgency–by the time they do so, they have been hollowed out and neither the force nor its equipment is suitable for big war absent a complete re-build–but then, that would be the logical “end state” for Dick Cheney and the military-industrial complex: the White House has gotten the outcome it wanted, never mind blood, treasure, and spirit nor international legitimacy, the insolvency of the nation, and the deepening recession. For those that “matter,” the profits have been properly banked in Dubai and elsewhere. So the final lesson from General Smith’s book is this one: the planning must be open, public, and endorsed by national referendum. The utility of force, in my view, can no longer be entrusted to elites–the case must be made to the public, and only the public may validate the utlity of force. Mind the gap….