Phi Beta Iota: With a tip of the hat to Rolling Stone and author Matt Taibbi, reproducing the entire article was the only way to show the emphasis added by Brother Chuck.  Updated to add photo and observe that this particular article is rocketing around the Internet.  See also our review of GRIFTOPIA.

Why Isn’t Wall Street in Jail?

Over drinks at a bar on a dreary, snowy night in Washington this past month, a former Senate investigator laughed as he polished off his beer.

“Everything’s fucked up, and nobody goes to jail,” he said. “That’s your whole story right there. Hell, you don’t even have to write the rest of it. Just write that.” 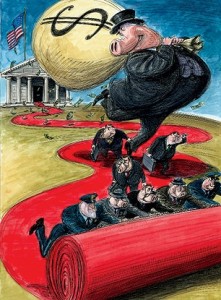 I put down my notebook. “Just that?”

“That’s right,” he said, signaling to the waitress for the check. “Everything’s fucked up, and nobody goes to jail. You can end the piece right there.”

Nobody goes to jail. This is the mantra of the financial-crisis era, one that saw virtually every major bank and financial company on Wall Street embroiled in obscene criminal scandals that impoverished millions and collectively destroyed hundreds of billions, in fact, trillions of dollars of the world’s wealth — and nobody went to jail. Nobody, that is, except Bernie Madoff, a flamboyant and pathological celebrity con artist, whose victims happened to be other rich and famous people.

This article appears in the March 3, 2011 issue of Rolling Stone. The issue is available now on newsstands and will appear in the online archive February 18.

Entire Piece with Emphasis from Chuck Spinney Below the Line
END_OF_DOCUMENT_TOKEN_TO_BE_REPLACED

This is an extraordinary book, combining gifted insights and turns of phrase with serious research that has a point worth fighting for: Wall Street led by Goldman Sachs has ripped off the entire US economy, and they still have most people thinking that politics matters.

It merits comment that while Michael Lewis was first, with Liar’s Poker, and was recently quoted as saying he had no idea Wall Street would get away with these obvious high crimes against the public for another 30 years, this author takes us all up another level, weaving in everything–politics, culture, sex, booze, LSD, and the occasional rabbid racoon.

The author is especially deft at observing, documenting, and describing the combination of lunatic ignorance and blessed righteous anger within the Tea Party, at the same time that he points out they have no idea that they have been funded and directed by the very people who have stolen their economy out from under them.

I am especially impressed by the author’s understanding of how Wall Street has managed to co-opt the very people they are destroying by leveraging the “shared” view of excessive government regulation. I for one absolutely believe that states should start nullifying federal laws and regulations that impair state-based businesses (e.g. butchers and cabinet-makers). What the people being destroyed do not understand is HOW they are being destroyed by Wall Street, which is essentially eating out the foundation from under them.

QUOTE (32): What has taken place over the last generation is a highly complicated merger of crime and policy, of stealing and government. Far from taking care of the rest of us, the financial leaders of America and their political servants have seemingly reached the cynical conclusion that our society is not work saving and have taken on a new mission that involved not creating wealth for us all, but simply absconding with whatever wealth remains in our hollowed out economy. They don’t feed us, we feed them.

END_OF_DOCUMENT_TOKEN_TO_BE_REPLACED

What really happened to Bear and Lehman is that an economic drought temporarily left the hyenas without any more middle-class victims — and so they started eating each other, using the exact same schemes they had been using for years to fleece the rest of the country. And in the forensic footprint left by those kills, we can see for the first time exactly how the scam worked — and how completely even the government regulators who are supposed to protect us have given up trying to stop it.

This was a brokered bloodletting, one in which the power of the state was used to help effect a monstrous consolidation of financial and political power. Heading into 2008, there were five major investment banks in the United States: Bear, Lehman, Merrill Lynch, Morgan Stanley and Goldman Sachs. Today only Morgan Stanley and Goldman survive as independent firms, perched atop a restructured Wall Street hierarchy. And while the rest of the civilized world responded to last year’s catastrophes with sweeping measures to rein in the corruption in their financial sectors, the United States invited the wolves into the government, with the popular new president, Barack Obama — elected amid promises to clean up the mess — filling his administration with Bear’s and Lehman’s conquerors, bestowing his papal blessing on a new era of robbery.

SICK and WRONG: How Washington is Screwing Up Health Care Reform – and Why It May Take a Revolt to Fix It

Let’s start with the obvious: America has not only the worst but the dumbest health care system in the developed world. It’s become a black leprosy eating away at the American experiment – a bureaucracy so insipid and mean and illogical that even our darkest criminal minds wouldn’t be equal to dreaming it up on purpose.

The system doesn’t work for anyone. It cheats patients and leaves them to die, denies insurance to 47 million Americans, forces hospitals to spend billions haggling over claims, and systematically bleeds and harasses doctors with the specter of catastrophic litigation. Even as a mechanism for delivering bonuses to insurance-company fat cats, it’s a miserable failure: Greedy insurance bosses who spent a generation denying preventive care to patients now see their profits sapped by millions of customers who enter the system only when they’re sick with incurably expensive illnesses.

The cost of all of this to society, in illness and death and lost productivity and a soaring federal deficit and plain old anxiety and anger, is incalculable – and that’s the good news. The bad news is our failed health care system won’t get fixed, because it exists entirely within the confines of yet another failed system: the political entity known as the United States of America.

Just as we have a medical system that is not really designed to care for the sick, we have a government that is not equipped to fix actual crises. What our government is good at is something else entirely: effecting the appearance of action, while leaving the actual reform behind in a diabolical labyrinth of ingenious legislative maneuvers.  [Emphasis added.]

STEP THREE: PACK IT WITH LOOPHOLES