Random Communications from an Evolutionary Edge

The 2012 election is now in play, and the Republican wing of the war party is gearing up to blame President Obama for America’s failed wars (who, while not entirely blameless, is hardly the architect of defeat) and the accompanying national humiliation. This email is about an opening shot that just appeared in the Weekly Standard.

END_OF_DOCUMENT_TOKEN_TO_BE_REPLACED

Occupy Wall Street describes itself as a “Leaderless Resistance Movement”. It defines itself as “anti-greed”. It is reminiscent of FDR’s famous dictum:  “We have always known that greed is bad morality; now we know that it is also bad economics”.  From the 1930s to and through the bridge decade of the “aughts” and forward further into this New Century, FDR’s words have now come hauntingly back with a powerful new resonance.  Update on the “Occupy Wall Street” pheonomenon – is it a movement? is it a 21st revolution? will it or its spririt endure and how? will it create systemic change? Duncan also makes reference, among others, to Frank Rich’s New York magazine article The Class Struggle has begun in the week of October 24, 2011.

Duncan’s dialogue partner for this program is Charles Eisenstein, author of Sacred Economics, and a blog, which include the excellent essays “Occupy Wall Street: No Demand is Enough” and “Why the Age of the Guru is Over”.

Below the Line: From Dan Drasin on Local Exchange Training Systems, Greece

END_OF_DOCUMENT_TOKEN_TO_BE_REPLACED

Democratizing ICT for Development with DIY Innovation and Open Data

The recent Net Impact conference in Portland proved to be an ideal space to take a few steps back and reflect on the bigger picture. There was much talk of new and alternative approaches to traditional development. The word “participatory” in particular was a trending topic among both presenters and participants. But exactly how “participatory” are these “participatory” approaches to develop-ment? Do they fundamentally democratize the development process? And do these “novel” participatory approaches really let go of control? Should they? The following thoughts and ideas were co-developed in follow-up conversations with my colleague Chrissy Martin who also attended Net Impact. She blogs at Innovate.Inclusively.

I haven’t had the space recently to think through some of these questions or reflect about how the work I’ve been doing with Ushahidi fits (or doesn’t) within the traditional development paradigm—a paradigm which many at the confer-ence characterized as #fail. Some think that perhaps technology can help change this paradigm, hence the burst of energy around the ICT for Development (ICT4D) field. That said, it is worth remembering that the motivations driving this shift are more important than any one technology. For example, recall the principles behind the genesis of the Ushahidi platform: Democratizing information flows and access; promoting Open Data and Do it Yourself (DIY) Innovation with free, highly hackable (i.e., open source) technology; letting go of control.

This is circulating in retired Special Operations Forces (SOF) email.

What a stark difference from the Tea Party movement. Patriots holding American flags have orderly events with poignant messages about liberty and freedom and then leave in an orderly fashion. Contrast that with the Occupy Wall Street miscreants! Arrests, rapes, flag burnings, pro-communist chanting, garbage, incessant drumming, filth, profanity and lots and lots of losers who still don’t really know why they’re there! 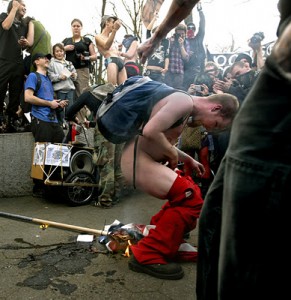 Phi Beta Iota:  We find this upsetting and disgusting.  Mindful of the protection of free speech, and mindful of the deep legitimate grievances that most (99%) of US citizens and even global citizens have against what the US Government has done in our name, the flag does not represent the US Government, it represents We the People.  Occupy Wall Street (OWS) is a mix of four parts: anarchists and undercover provocateurs; local only; alternative direct democracy; and electoral reform act and other tangible change agents seeking a national unity approach.  OWS is already facing twin challenges from police departments over-funded by the Department of Homeland Security (using borrowed money), and a massive corporately-funded disinformation campaign seeking to cast them as irresponsible and even dangerous.  As a movement, we find OWS to be as responsible as it is possible to get–they have the intelligence and the integrity that the US Government lacks.  However, they have not learned the art of counter-intelligence and internal security, and will continue to suffer from this kind of gratuitous and totally uncalled for stomach-turning crap (pun intended).

Tip of the Hat to Gerry Goedhart at Facebook.

Tip of the Hat to Robert Smith at Facebook.